Charles “Teenie” Harris is a name I had not seen mentioned when doing previous research. Considering he did most of his work in Pittsburgh, a city just a three and a half hour drive from my home, that’s pretty amazing. But not amazing in a good way. Amazing in “that’s a shame” way.

However, there’s no one to blame but myself for not knowing about the great talent who was known as “One Shot” Harris. Sometimes, you have to dig a little to find treasure. It makes me wonder, for every one of the marquee photographers, how many unheralded or under-appreciated ones are out there to discover. I’m sure there’s hundreds. Maybe even thousands.

But the more important question is: who was Charles “Teenie” Harris?

Charles Harris (1908-1998)  was born in the “Steel City”. Pittsburgh, Pennsylvania is where he made his living as a photographer as well. “Teenie” was from the Hill District, a predominantly African-American neighborhood, and there he opened a studio in the early 1930s. He specialized in glamour portraits, but in the early part of the 1940s he began freelancing for the Pittsburgh Courier, the city’s leading black newspaper. Even though Teenie covered The Hill for a “local” paper, his work would be seen across the country. The Courier was distributed by a network of Pullman train porters.

Teenie captured the soul of The Hill. He covered the area like a blanket, and with that, he covered African-American life in America. Beautifully and sometimes brutally. From parades, weddings, crime scenes and nightlife to civil-rights protests and examples of ugly acts of racism, Teenie was there. He not only captured the everyman, but he captured some of the biggest stars of his time. Martin Luther King Jr. Dwight Eisenhower. Louis Armstrong. Lena Horne. John F. Kennedy. Muhammad Ali. Duke Ellington. Jackie Robinson. Nat King Cole, and so many more. The Hill was known as “Little Harlem” from the 1930s through the 1950s because it had such an exciting music scene. Teenie had his camera in the thick of it.

Teenie Harris’ photographic prowess was known to the readers of The Pittsburgh Courier, but now it’s spread further out to the world via the Teenie Harris Archive (teenie.cmoa.org). In 2001, The Carnegie Museum of Art purchased the archive of nearly 80,000 images. It’s a work in progress and a huge job at that. The story of the Archive’s work is worth a read, but I implore you to investigate the wealth of images there. You will see the work of a master of composition. Proof that Harris was not just a great African-American photographer. He was a great American photographer. 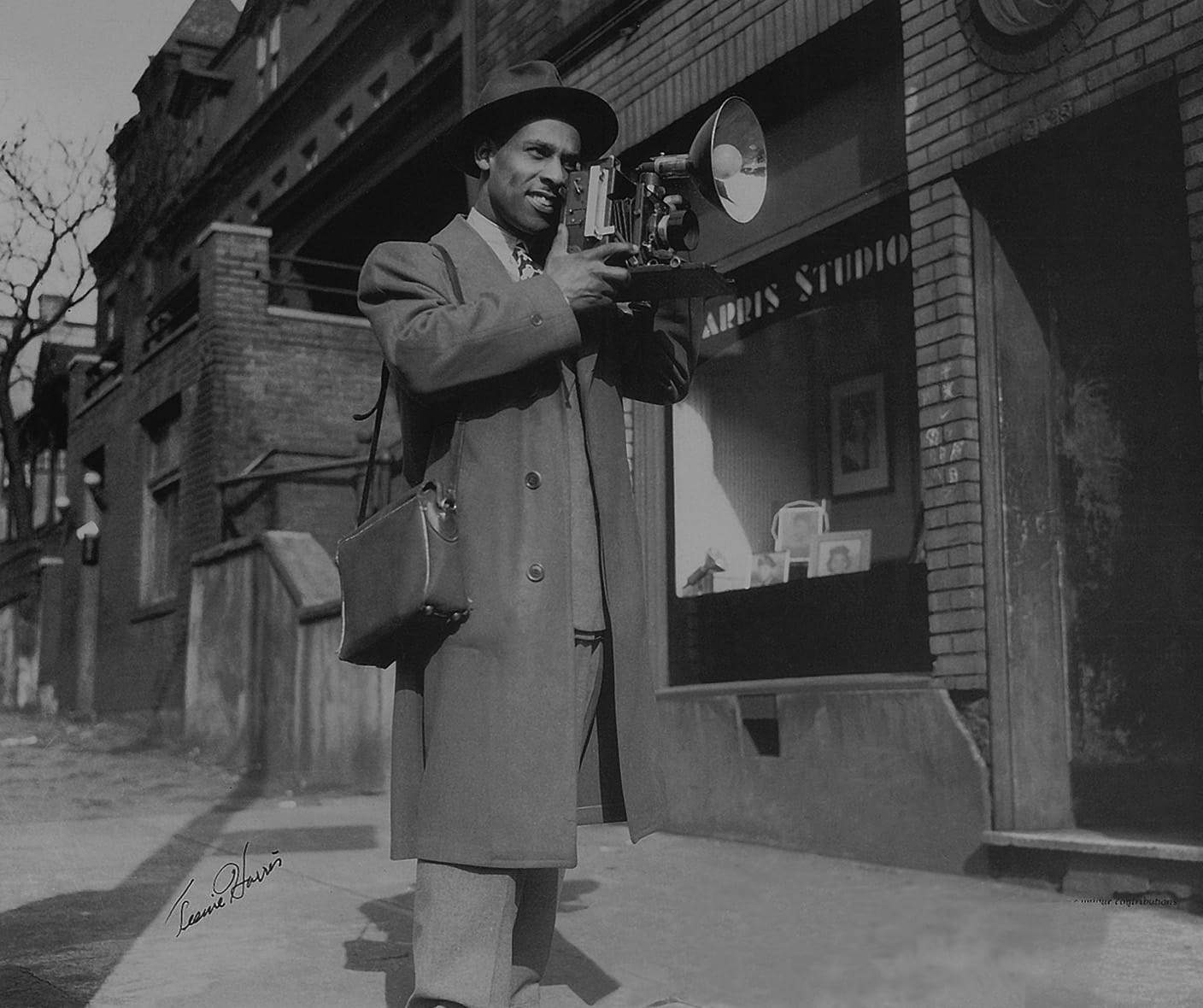 I must admit,  I think the nickname “One Shot” is awesome. Teenie earned that nickname in a time where film was the only option. There was no “chimping”. There was no salvation to be found in Lightroom. One shot. But that’s not the most inspiring thing I took from investigating Teenie Harris’ work.

What struck a chord with me was Harris’ tight grip on the pulse of the Hill District. The feel for the community he covered and how he portrayed everyone in it as a star. Stars in various acts of the biggest motion picture of all… everyday life.

Harris was, and still is, able to put the viewer into the Hill District. The viewer becomes more than observer, they become part of the scene. The images are comfortable even when candid. A perfect balance of familiarity and fascination.

While it’s true that the Hill District was Teenie‘s beat as a photojournalist, I immediately got the feel that this was his dumping grounds. That this was his home. That got me thinking that I need to make that impression with my shots from my hometown. And, more importantly, I need to shoot there more often.

I’ve shot a lot in Baltimore lately. I jump immediately at the chance to go to shoot in Charm City . There’s more opportunity there. There’s more subjects. It’s true there’s more diversity to be found and that means more interesting people. That’s not a slam on Harrisburg, Lancaster and York, my “home turf”. That’s just fact. Bigger city, more opportunities.

But shooting in a city like Baltimore has me spoiled. Spoiled that sometimes I’ll forsake a free hour or two of shooting closer to home.

And that’s not right.

I can say I’ve been spoiled by shooting in Baltimore. It’s been a luxury shooting there lately, but it’s also luck. I don’t normally get to go there as frequently as I have been lately. As a result, I’ve not shot around here, in between Baltimore trips, because it’s not as exciting. But that doesn’t make my neglect of my locales right.

This area is where I live and where I work. It’s also where I do the bulk of my shooting. That being said, it’s a crime to forget where your bread is buttered. To turn my nose up at the chance to shoot on my stomping grounds for an hour or two is absurd. A few months ago I wouldn’t have debated it. I would have been out there, camera in hand. Frustrated because there aren’t as many shots to take? Definitely. But I would have been out there. And that’s what it’s all about.

Shooting in these three towns, on my schedule, doesn’t present a high yield. It requires patience. It requires planning. Whereas shooting in a bigger city sharpens your skills with the wealth of action, shooting around my parts requires even more precision. The opportunities are fewer and you have to truly be like “One Shot”.

In another city, another town, I’m a stranger in a strange land. I’m wide-eyed and trigger-happy. But here, I know there streets better. I know these people better. I know the stories. I should never look down on the opportunity to tell them. To put a viewer in my community much like Teenie Harris did.