Street Photo of the week by Cyrille Druart

Cyrille Druart is a French Street Photographer who was born in Paris and has been shooting in the streets since he was 23 years old. He enjoys traveling and taking photos in large cities, watching people interact with each other and their environment. He likes looking closely at their behaviours. At the same time he is intrigued by isolationism when presented in contrast to urban environments. Cyrille is especially interested in women and fashionable people. He shoots mostly in black & white and has a taste for highly contrasted, dark looking images. Originally a designer, he is creative and observant of elements that help him make interesting compositions.

Cyrille has had his work published in magazines and online media and has been interviewed about his work quite a few times. You can read those interviews and check out more of his beautiful work on his website. 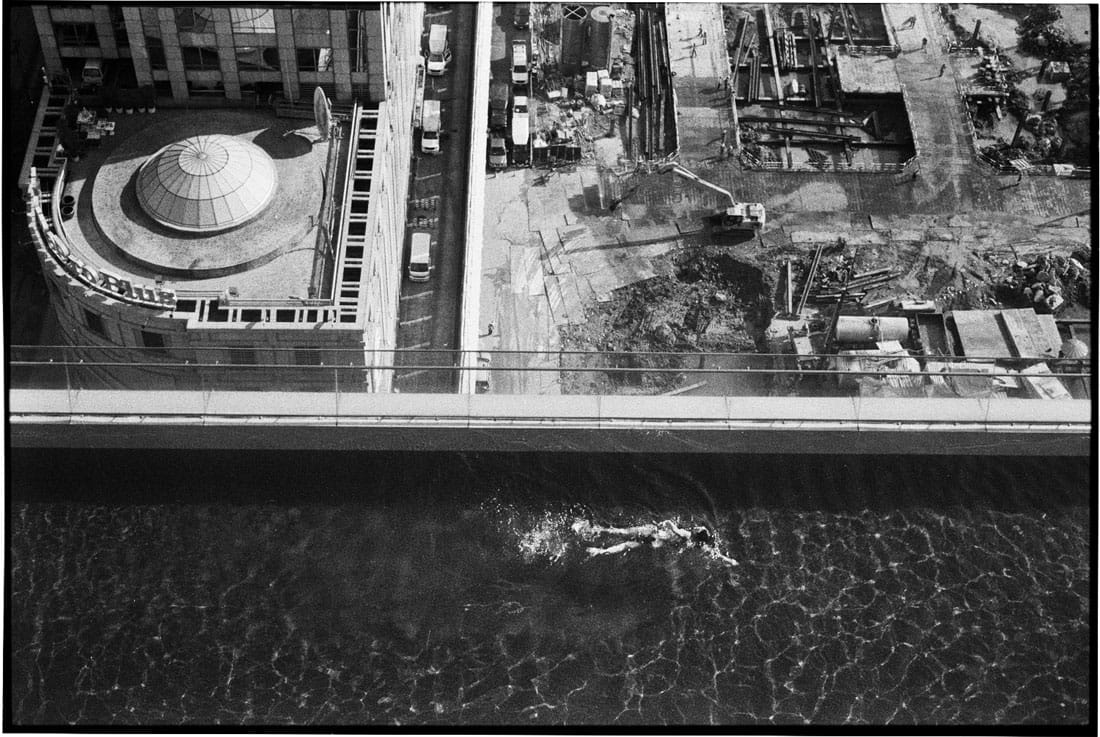 Cyrille has managed to capture 2 different worlds in one photograph in this shot. Shot from a high vantage point he has placed his lens in such a way that it looks down over an infinity pool of a hotel (possibly). In the pool a woman is swimming, and her body has been captured as it gracefully moves within the clear pool waters. She has been photographed just as she escapes the middle vertical of the photograph, her feet slightly touching that invisible line. The pool is placed in the lower third of the photograph. The rest of the top two thirds of the frame is occupied by other elements. Elements that are amazingly contrasty to what exists in the environment of the swimming pool. Below the hotel building and to the top of the pool as seen in the photo, hidden from the swimmer’s view but not from ours, is an ugly construction site, filled with machinery, dirt, some workers and other elements being worked on. Concepts such as work, disorder, mess, labour come in direct contrast with concepts such as clear, clean, cool, and relax. But there is still more to this amazing photograph. The top 2/3 of the image isn’t all about the construction site. The construction site occupies the two thirds of the top part. The rest of the image includes a very straight road and am interesting building with a round roof. That building, with its perfect lines and circular dome, that perfectly straight street and the white wall separating it from the construction site, are in direct contrast to the mess we talked about before. So many things are happening below the woman swimmer who is in her perfect micro-world enjoying her relaxing moments in that impressive infinity pool.