Home Weekly Street Hunters pic A Light in the Darkness

A Light in the Darkness

You may have seen the crazy streethunt video we made in Rethymno using off-camera flash during the town’s annual carnival celebration a few months ago. This year was the first time I had experienced the ‘infamous’ Rethymno carnival, and I just couldn’t believe how perfect it was for street photography! The streets were spilling over with jovial people, dressed in weird and wonderful outfits, dancing and generally having a good time. No-one cared about having their photos taken with a flash – in fact they seemed to really love it! The trouble was, once carnival ended we had to return to reality, and one of the coldest and wettest winters Rethymno has experienced for several years.

I shot this photo on the Tuesday just after carnival weekend – I’d been cooped up all day and I needed to head outside for some fresh air and some photography in order to keep my eye in before the carnival high wore off! Unfortunately I’d left it a bit too late to start my walk, and there was already a blue-grey tint to the sky that meant that sunset was only about 15 minutes away. I cursed myself for not heading out earlier – I wanted to walk beside the sea and I really didn’t feel like heading into the bright lights of the town. But the road beside the beach is barely lit with the street lamps in the winter, and the problem was further exacerbated because of all the construction work that was taking place along the road. Nonetheless, I figured I didn’t have much to lose by heading along the dark road, so off I went. I didn’t have much hope for making any good shots, but I had my fastest lens on my camera, and I knew I could always crank my ISO right up and maybe get away with a shot of something; even though the road was virtually deserted!

One of the only signs of life I could see was a man sitting on a wall looking at his phone, and even from a distance I could see the light from his phone was lighting up his face really nicely, making him stand out well against the (now) deep dark blue skyline and sea. As I got closer to him in a position where I was directly opposite for a neater composition, I saw he was an even better photo opportunity than I first thought as he was smoking a cigarette, the embers of which would glow each time he took a drag on it. He was a very challenging subject to achieve a good exposure for, as with my own eyes it was quite difficult to see him clearly, which meant lining up the spot meter circle in my viewfinder pretty difficult. I managed to get the meter right for the exposure though, but then I was presented with another problem. I needed to catch the cigarette end ‘glowing’ as the man puffed at it, otherwise it would just appear too dark. But as it was so difficult for me to see it made achieving this quite difficult. I shot four frames, but this was the only one that showed the cigarette glowing properly. When I got home I couldn’t believe how surreal the effect was, the camera had actually seen much more of the scene than my eyes had – it had even picked up the last vestiges of the sunlight in the sky as it seeped through the clouds. I also loved how the shot appeared to have been lit with an artificial light like a flash or something, even though the lighting is all natural. Talk about lucky! 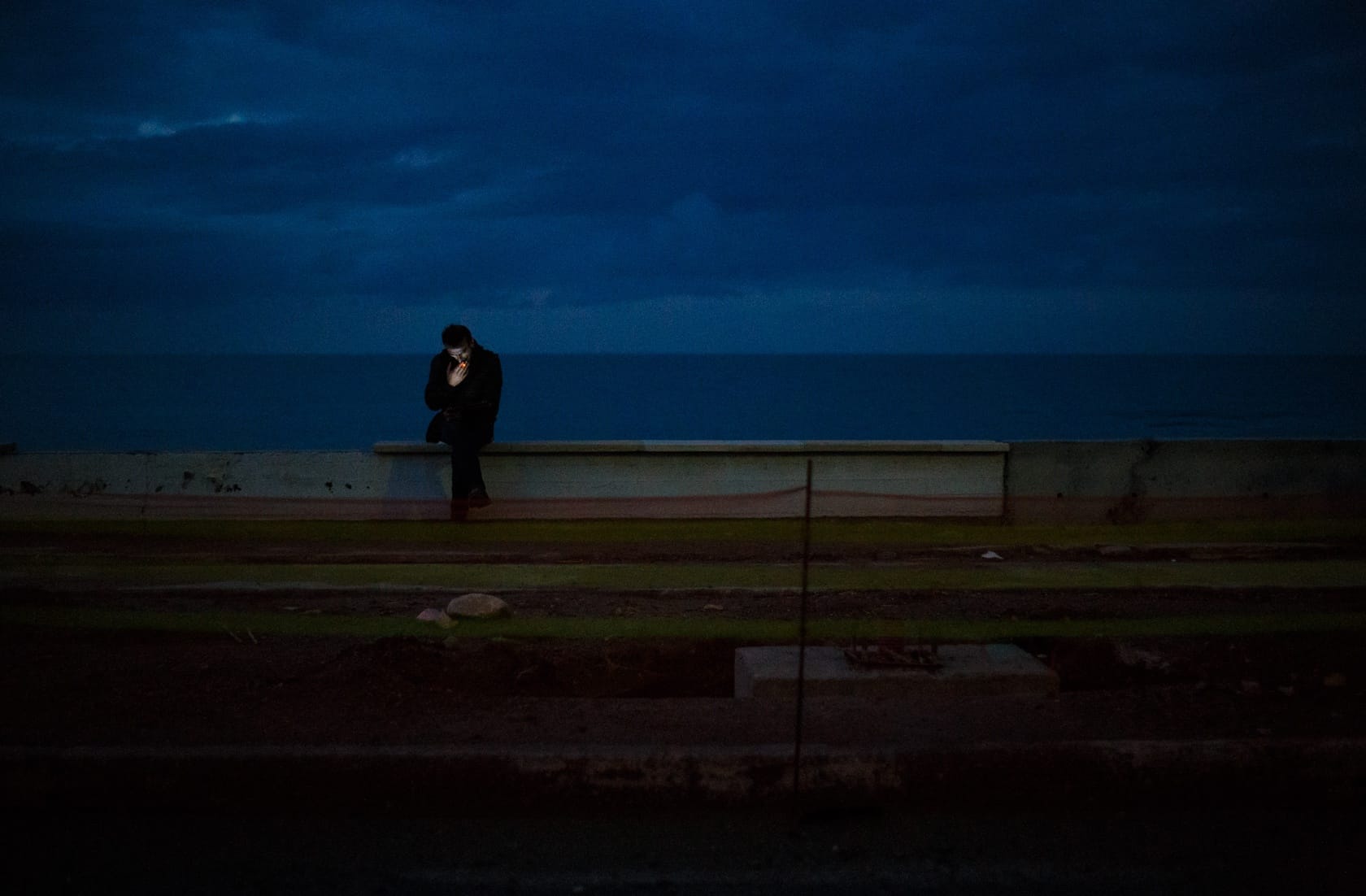