I’ve spoken before about how sometimes I can head out to take photos and I’m not able to ‘see’ anything interesting that makes a good shot for hours, despite walking miles and miles with my camera. On other occasions I can be in a rush to get somewhere and I’ll see something that would make an incredible photo, but I just don’t have time to stop, take out my camera and make a shot. This happens more often than not – anyone who knows me would tell you I’m always rushing to get places because I’m consistently late for everything! In the week before I’d shot this photo I had an absolute nightmare with this. On one particular day I was running to be somewhere and I saw no fewer than 5 brilliant photo opportunities present themselves, but I knew there was just no way I could stop to take a shot. How frustrating!

On the Saturday I made this photo I had a little more time on my hands, but I was running late again. I was heading out to meet one of my fellow Street Hunters Spyros Papaspyropoulos for a photo walk, which we always time for the ‘golden hour’ when the sun starts to set and is low in the sky, producing some lovely long shadows. In a happy coincidence, it just so happens that golden hour occurs just before happy hour at one of our favourite bars in Rethymno, so we’re able to kill two birds with one stone! Because we always meet around similar times, I’ve got to know exactly how the light behaves at certain points along my route from my house to where I meet Spyros in the middle of town. The street where I shot this photo is called Arkadiou, and it’s a long straight cobbled thoroughfare lined with shops that links the centre of Rethymno old town with Ἄγνωστος (Agnostos) Square, marking the end of the ‘middle’ of town. If you walk down Arkadiou at around 6PM most of the street is in shadow, save for a few shafts of strong sunlight that filter through the gaps between the tops of the buildings. On this Saturday as I hurried along I looked to the supermarket, where I know a ray of sunlight always hits the graffitied metal shutters of the fresh fruit stand. Sitting right beside the stand was an older lady sewing, and she was wearing an amazingly bright orange shawl that the light caught just right. I thought to myself “wow, that would make a great shot, but I’m running too late as it is, I’d better keep going”, so I walked right past. I kept on walking up the street, but the amazing bright orange of the shawl was in my mind. In the end I stopped, and I told myself “you can’t miss another photo opportunity this week!”, so I took my camera out of my bag and turned back.

I made several photos of this woman as I walked back to my ideal composition ‘spot’ as I wanted to be sure my camera was set up right – I needed to meter for the sunlight, but not underexpose the photo to lose any mid-level details. Equally I had to be careful not to try and include too much shadow detail, as this would leave the areas of strong sunlight horribly overexposed. I also had the problem of framing, as I was using my 50mm prime lens, and I couldn’t step back any further as I would have ended up standing in the display of products laid out on the pavement from the shop behind me! Ideally I would have shot this photo a little wider, as it would have been nice to see some dark shadow negative space to the woman’s right so she wasn’t so close to the edge of the frame. I made several photos of her looking down, but for just one shot she looked up to see what this lunatic with a camera was doing taking photos of a graffiti covered stand. Just as the sunlight fell across her face and her raised hand I was able to make a shot. I love the juxtaposition between the orange in her shawl and the aquamarine blue of the graffiti tag too. Crete is just fantastic for shots like this – there’s powerful light and strong colour everywhere!

So I apologise for being late Spyros, but sometimes you do just have to stop and make a photo when an opportunity presents itself – this turned out to be by far the best photo I shot all day! 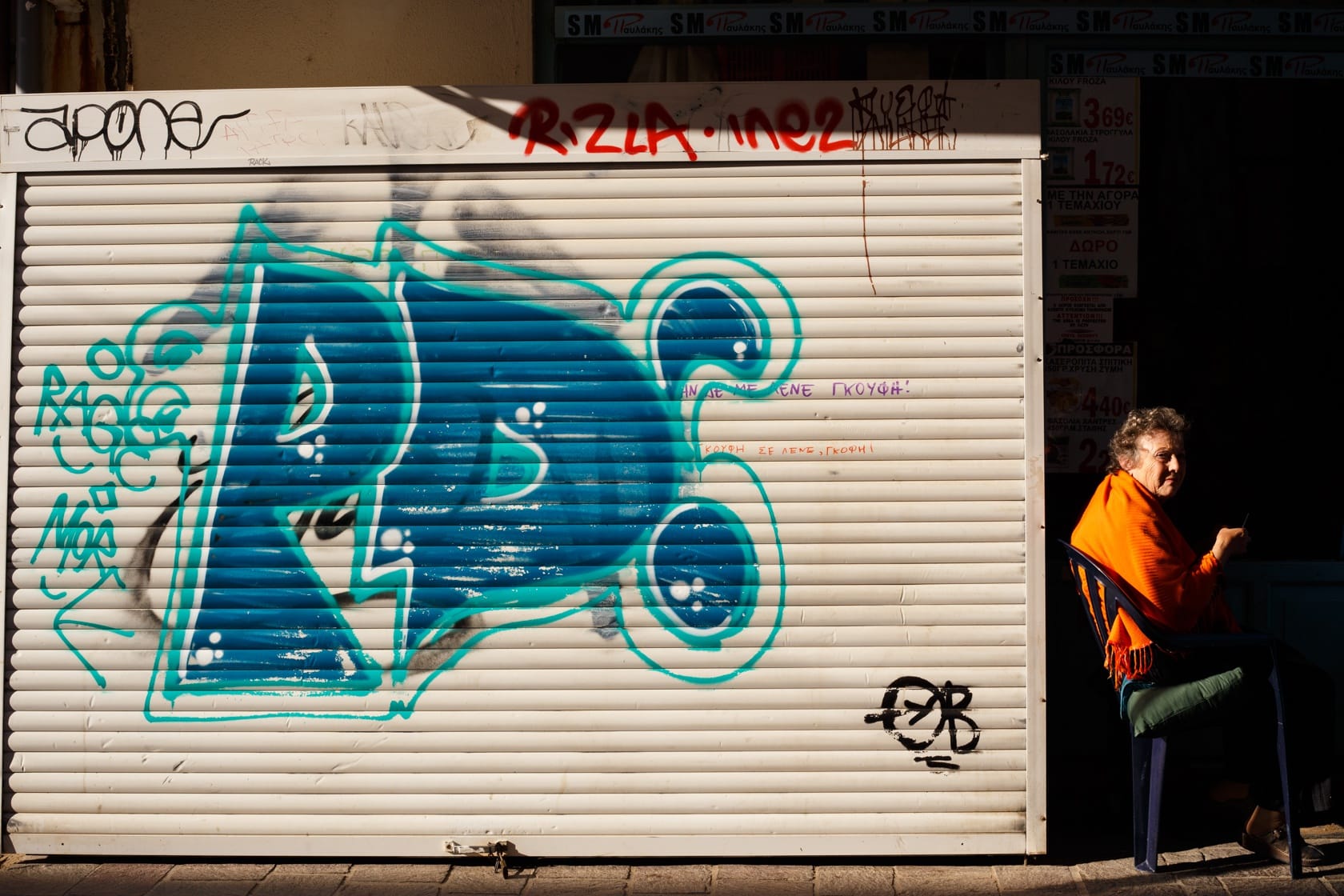