Street Photo of the week by JB Maher

JB Maher is a talented Street Photographer based in Dublin, Ireland, originally from Co Meath, Ireland. I discovered JB’s work while scanning through the images of the photographers in the Burn My Eye collective. It turns out he is a member of that group of expressive Street Photographers which steadily produce great work.

JB got into photography in his early 20’s and the reason why he did so was to manage to document his experiences before he forgot about them. As he mentions in his Burn My Eye bio:

“Having a very bad memory, pretty much anything beyond a few years is a blur and almost nothing of my childhood can be recalled. Perhaps this unreliability unconsciously drove me to pick up a camera as a means to actively record and attempt to remember those mundane, unexpected and singular moments I happen upon in the everyday.

That is, of course, if I remember to do so.”

From the very first time he picked up a camera in the early 2000’s until today, JB has been interviewed many times, has had his work featured in print and media, has joined the Burn My Eye collective and has had his work exhibited in quite a few exhibitions around Europe.

You can see more of JB Maher’s photographic work on his Tumblr site at http://jbmaher.tumblr.com/, on the “BURN MY EYE” website on the section about him at http://www.burnmyeye.org/jb-maher/ or on his website at http://www.jbmaher.com/. 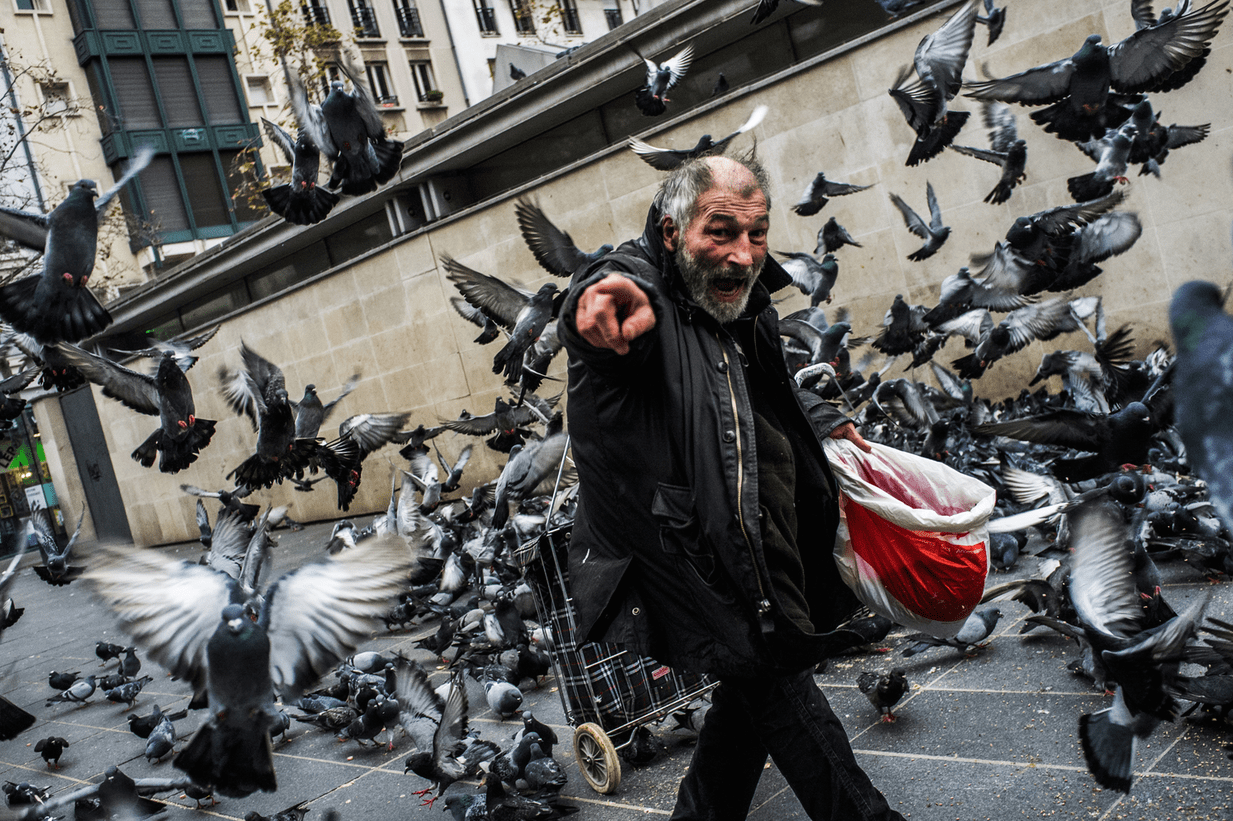 The energy that pours out of this photograph is tremendous. There is so much action, so many visual stimuli, but JB Maher has managed to capture the moment when everything is perfect. A man, aggravated at JB for taking his photo points a finger at him, probably screaming something at the same time, while pigeons, hundreds of pigeons are flying around him in a frenzy. This photograph has a number of elements that when combined together, make the viewer believe that this “Bird Master” is sending his flying minions to attack the photographer! He is commanding them to fly up and peck JB to death. A scary scene that is intensified even more by the fact that there isn’t a single bird flying in front of the man, and at the same time the majority of the pigeons are facing the lens of JB. As a final note that red bag just pops out giving the man an ever so slightly better separation from the background. A truly intense image!