Street Photo of the week by Alex Webb

If you are into Street Photography then chances are that you know of Alex Webb and his work. Alex Webb is an American originally from San Francisco, California. Since high school he was fascinated by photography and in 1976, after completing his studies in Photography, he joined the international cooperative Magnum Photos as an associate member. Since then Webb has been on many assignments photographing in the American continent mostly. He has worked for magazines such as New York Times Magazine, Life, Geo and National Geographic. His work has been exhibited countless times.

I remember when I first got into shooting, whenever I used to stumble upon Alex’s images by chance on the web or when reading photography books, I was always intrigued by the way he could just freeze time in such a perfectly organised manner. Now that I have been photographing for a few years I am not only intrigued but dumbfounded by his skill! This man can really see the world in slow motion. He can foresee situations and freeze moments the second that everyone is in perfect sync. I have seen other Street Photographers do this in maybe 1 or 2 of their photos, even 3, but Alex Webb has been able to master this type of “order from chaos” photograph. He practically “owns” this style of Street Photography! A few weeks ago I read a book of his called “Alex Webb and Rebecca Norris Webb on Street Photography and the Poetic Image”. In that book Alex Webb writes:

“I think that I’ve always been drawn to visually complex photographs. Many of my early photographs contain more than one element, have more than one point of focus. As the years have passed, they’ve become even more complex. These days, I often feel as if I am walking a fragile line visually-pushing the frame to include more and more, just up to, but falling short of, chaos.”

To better understand what Alex Webb is looking for when in search for images, you must visit his website at http://www.webbnorriswebb.co or his profile on the Magnum website. 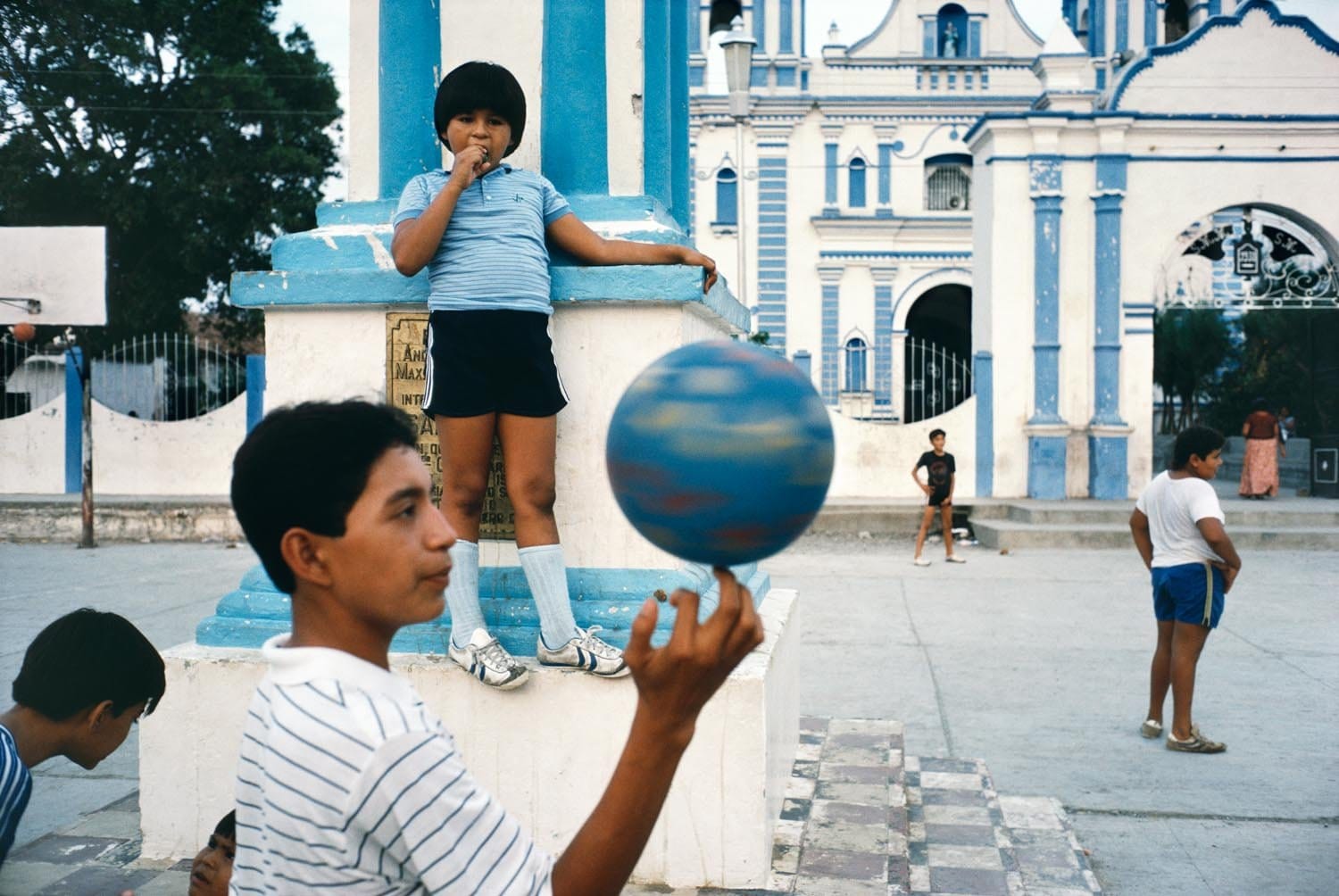 This photograph is a classic example of Alex Webb’s vision! It was shot in Tehuantepec, Mexico in 1985. This image has so much visual information. So many faces, so many elements. It shows kids mostly standing still, each facing in different  directions, and only one lady can be seen in the background. The rest of the characters are boys. All of them are wearing similarly coloured clothes with various hues of blue. Dark blue, light blue or navy blue, they are all in blue and that is what matters. The only woman in the scene is in a light coral colour skirt with a dark red top. The buildings in the back have strong blue lines that match the clothes of the kids. But when studying this photograph more, one can notice more details. Things that are mind blowing! Only a true master like Alex Webb can see the world at such slow speeds and capture moments so memorable. Look at the colours. The colour of the skirt of the lady leaving is the same colour as the colour of the basket ball going through the hoop in the other side of the photo! All boys are seemingly not walking, all boys have visible faces to some extent, but the lady is walking away with her back to us. She is the total opposite. Opposite colour clothes, doing the opposite thing and facing in the opposite direction. Once the viewer has seen that, it then becomes clear that the only 2 fast moving objects in this photo are balls. The one on the left, going through the hoop and the one being spun by the kid in the middle of the frame. But the photo has more stories to tell. The two boys on the left are having a conversation. Alex made sure to let the kid with the spinning ball walk away from the shorter kids face so it would be visible. That way we can see the conversation taking place and can understand what is happening. The boy on the ledge is eating something while looking at the spinning ball on the finger of the kid in the foreground. Then we have a boy with his hands on his waist looking to the right and in the far back another boy holding his crotch (can I say this here?). The whole scene is as if it is alive and we still haven’t gotten into the process of trying to figure out what is in each character’s mind. This photograph isn’t just a photograph, it is an experience!