I have very strong memories of shooting this photo. It was the first Monday in March and the weather was glorious – the first really nice sunny and warm day of the year after a surprisingly long cold and wet winter in Rethymno. I was also in a particularly buoyant mood as the day before my football team Norwich City had triumphed over their bitter local rivals Ipswich Town that lifted them to the 3rd position in the Championship and a step closer to returning to the Premier League.

So on Monday morning I headed out along the road that runs alongside the beach towards the outskirts of Rethymno. The road is mostly lined by tourist bars and hotels, which look very forlorn as they largely remain shuttered during the winter months of ‘off-season’. This morning was different though – the start of March (threatening the impending arrival of the first wave of tourists later in the month) and the appearance of fine weather had prompted a flurry of construction activity as hoteliers and business owners (as well as the local town council) sought to spruce up the outskirts of the town so it looked at its best for the summer. This presented me with lots of potential street photography shots, as people working often make for interesting dynamic subjects, and I had the lovely strong sunlight to play with too. I was planning to try and make use of some interesting street architecture or something with powerful geometric lines that would be further emphasised by the natural light – so I was on the lookout for anything that might fit the bill.

I walked past two workers who were sandblasting the render from a building, and I loved the clouds of dust being thrown up as they worked, but just couldn’t make an interesting shot. Then next I came across the frosted glass privacy ‘wall’ at the front of the hotel next door to them, and I really liked how sunlight backlighting the glass really lit it up and gave it a surreal off-white colour. I tried making several shots of the glass showing the road and street scene, but even when I put a person in the frame I just couldn’t make the shot interesting and powerful enough. I decided the shot wasn’t going to happen so I began to continue my walk.

As I walked away I thought I’d try the shot looking backwards towards the buildings, focusing on one of the workers I’d seen before. I liked the different perspective and how the lines of electricity wires and the glass converged to form a triangle. I made two shots but these were still too ‘busy’ – the third shot though, was what I was looking for! I simplified the frame as much as I could to remove distracting elements, which I did by crouching down and zooming my lens to 70mm – not a very common focal length for the street. I made sure to balance the line of the hotel sign with the electricity wires so that both were parallel, which left me with a small triangular frame in to fit the construction worker into. I loved the graphical quality of the hotel sign, and how it was named Apollo with a sun graphic as the logo – it really fitted the day’s weather (Apollo is the Greek god of the sun). The fact the construction worker was shirtless and working fitted nicely with the Greek god theme too – the Greek gods often being portrayed as physically fit. I was very lucky with the last part of the shot too – it just happened that I caught the moment he raised the sandblasting lance to a pointing gesture so it formed a nice parallel line with the sign and looked very dynamic. What luck!

So the moral of the story? If you can’t quite make a shot work for you but you feel like there’s something interesting in it, try to shoot from a totally different angle and perspective – you might just surprise yourself! 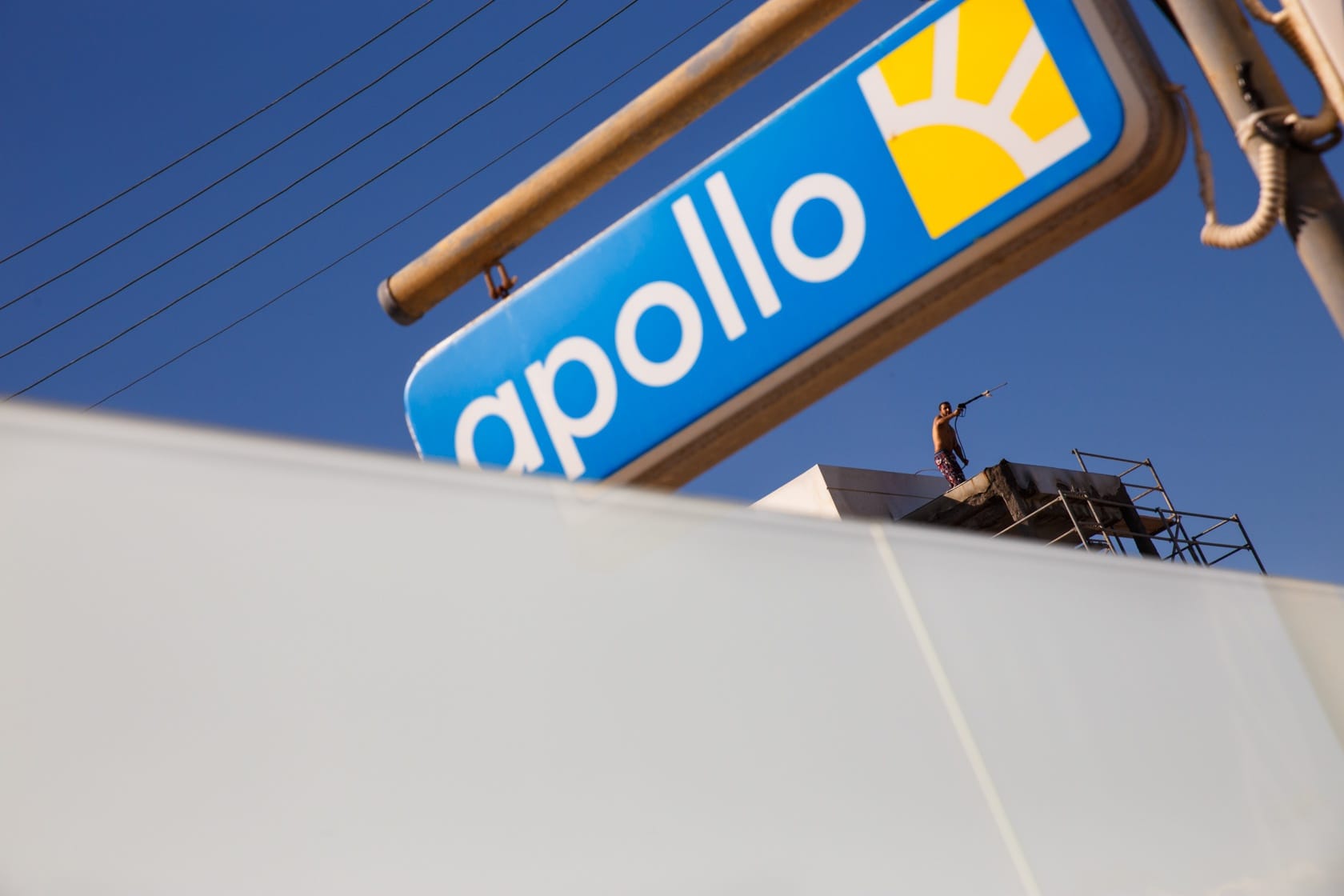