One of the most wonderful things about being actively involved in the photographic community is the idea of sharing. Not just sharing each other’s work, but everything else. Ideas and tips, creatively and technically, flow constantly. There’s a wealth of information out there. In fact, it can be overwhelming. It’s far too easy to be distracted by the opinions of another photographer. But when all else fails, one thing still remains… the photograph itself. And all that verbal and written noise disappears in an instant when a friend or colleague shares the work of someone else with you. The work of someone outside the circle shared by both of you. It’s kind of special, this idea… that your friend thinks enough of a particular photographer to share their work with you. When there’s nothing for them to gain by doing so. When they’re that blown away that they think you just might be, too. It’s simple, yes. It’s naive and romantic. But it’s how like-minded folks spread the gospel. Word of mouth that’s backed up instantly by an image. And this minor miracle, this phenomenon, happens every day. Sometimes it makes you stop dead in your tracks and makes you almost weep in awe. That recently happened to me when a friend of mine shared an article on the superb photographer, Fan Ho.

Fan Ho may not be as well known as Henri Cartier-Bresson and the other great street photographers of the western world, but his work is  just as magnificent. He began photographing the streets of Hong Kong in the 1950’s. His work from that decade and the next is positively breathtaking. He captured Hong Kong in an incredibly cinematic fashion. In fact, Ho became an acclaimed film director in the following years. He has won over 280 wards from international exhibitions and compositions for his photography.

Fan Ho’s photography blended scale, geometry and a slightly surreal vision to capture Hong Kong in a most romantic way. He magically used the available light and shadows to create, or re-create a sense of almost childlike wonder, a rekindling of the sense of awe experienced by a child when first seeing the city.

Ho is a member of the Royal Photographic Society and Royal Society of Arts in England, and an honorary member of photographic societies in over a half-dozen other nations. He has been invited by numerous universities in Taiwan and Hong Kong as visiting professor.  Now he is represented in the United States by Modernbook Gallery, just wrapping up an exhibition in San Francisco. He is now also a Fellow of The Photographic Society Of America. He currently resides in California. 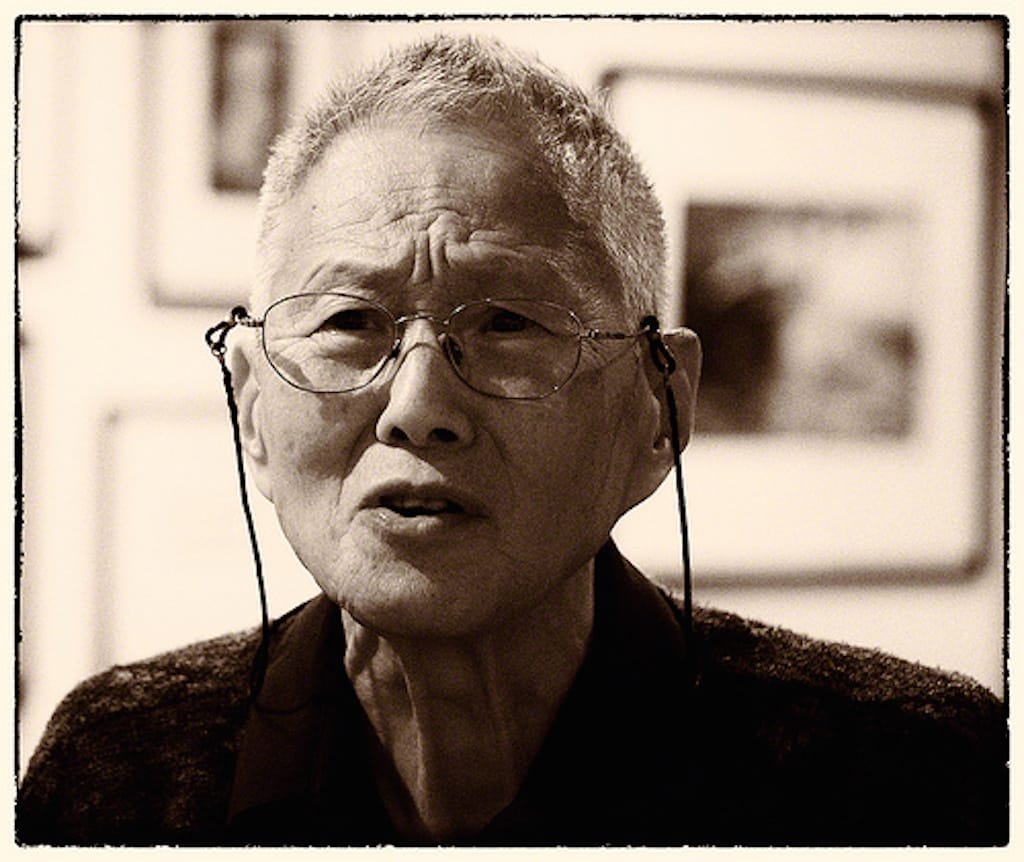 When looking through Ho’s photographs, after drinking in the sheer beauty, it’s obvious that many of his pictures are just huge. Massive in a way that they deliver a sense of scale that’s not like most of the work I’ve viewed and been drawn to before. Ho’s sense of scale was a main ingredient in making  impressive street photographs, but when coupled with his masterful skill in composition, the images become so very remarkable. Add in his use of light, and they become even more so as I let my eyes swim in them. Fan Ho precisely controlled all the ingredients and created masterpieces.

Thinking on this, the light switched on: more than one element can make a great photograph.

Looking at Ho’s work made me realize that I’m leaving many elements to chance while I chase isolate subjects shooting wide open. Now I still love shooting that way, but I get caught in the “rush”  of that style, a shadow depth of field, easily. I often forgo thinking about the other elements. And that makes me wonder, how much better could those shots could have been?

It would be easy to become discouraged looking at Fan Ho’s work because it’s that good. But it’s honestly eye-opening and inspirational. Ho could make a staggeringly wide or tall shot, with just a single person in frame, feel incredibly intimate. Even though there’s really so much going on in these shots, they still somehow feel very personal. There’s an unexplainable sense that Ho has put his mark, his soul into his pictures. I fully believe that I get that sense because Ho was in complete control of the situation. The focus, the lighting, the composition, the timing… everything.

And this makes it perfectly clear. The more you control all the elements of the photograph, the more that image becomes yours. The more it becomes… you.