When I’m out on the streets with my camera for hours at a time I can sometimes find that I get really demoralised. Some days I just won’t ‘see’ anything happening that makes a good street photo. Note how I put ‘see’ in inverted commas – I personally believe a great street photographer will always be able to find something happening in the street and use their ‘vision’ to create a great shot. But unfortunately I have days sometimes where my photographer’s eye is a little cloudy! I also have days where I’m just unlucky – I’ll miss shots through timing – a perfect subject will arrive at a scene too fast before I’m able to frame properly, or something will happen that disrupts my shot. The day I shot this photo was just one of those days. I was feeling very annoyed and frustrated with the work I was producing, and nothing seemed to be going ‘right’. I was also feeling creatively at a very low ebb – we’d just had the craziness of the carnival in Rethymno and I’d been experimenting with new techniques using an off-camera flash – post carnival I didn’t want to go back to making ‘boring’ shots that I felt like I’d made a hundred times before.

To add further fuel to the fire of my frustrations I was practicing with using an unfamiliar lens to what I’m used to for street photography. I’d recently added a standard zoom lens to my collection (24-70 to those who are unfamiliar with the terminology) to use as an event photography lens. I wanted to learn the lens better so I took it out on the streets to get to know it, but such a large zoom range seemed very strange to me, as I’m not so comfortable with the effect produced from using a longer focal length for street work. You could say a 35mm field of view has spoiled me a little!

So all in all I was feeling quite negative about my photography work at this point in the day, and I’d lost all the daylight that had inspired me to head out to shoot some photos in the first place! So I headed onto Arkadiou, Rethymno’s main shopping street, to start my walk back home. As luck would have it, I saw this lady step out of her shop ahead of me with her cigarette and cup of coffee.

As my confidence was at quite a low ebb, and I hadn’t been very lucky with shots that day I didn’t much feel like risking a shot from very close, so I approached from the side of pavement at an angle, and shot from much further away than I’d normally attempt. This different approach actually offered something different to what I was used to, which I really liked. I loved how a side-on viewpoint in portrait orientation emphasised the walls of the shops, turning them into an abstract series of ‘layers’ of vertical lines. The fact I shot from almost behind my subject meant that she was almost lost in this sea of lines – only a small portion of her profile is visible which breaks the monotony of the shop fronts. I’d had to open my lens up to its widest aperture owing to the fact it was dark, but the shallow depth of field this created also helped to focus attention on my subject. The downlighting from the shops cast a strong light on her face too, which makes for some very atmospheric shadow tones, and these are my favourite part of the image – it reminds me of the feel of the album cover for Tom Waits ‘Closing Time’.

In the space of a few seconds I’d gone from feeling that all hope was lost from the day’s shooting to making one of my most-liked images of the last few weeks.

That’s the magic of street photography! 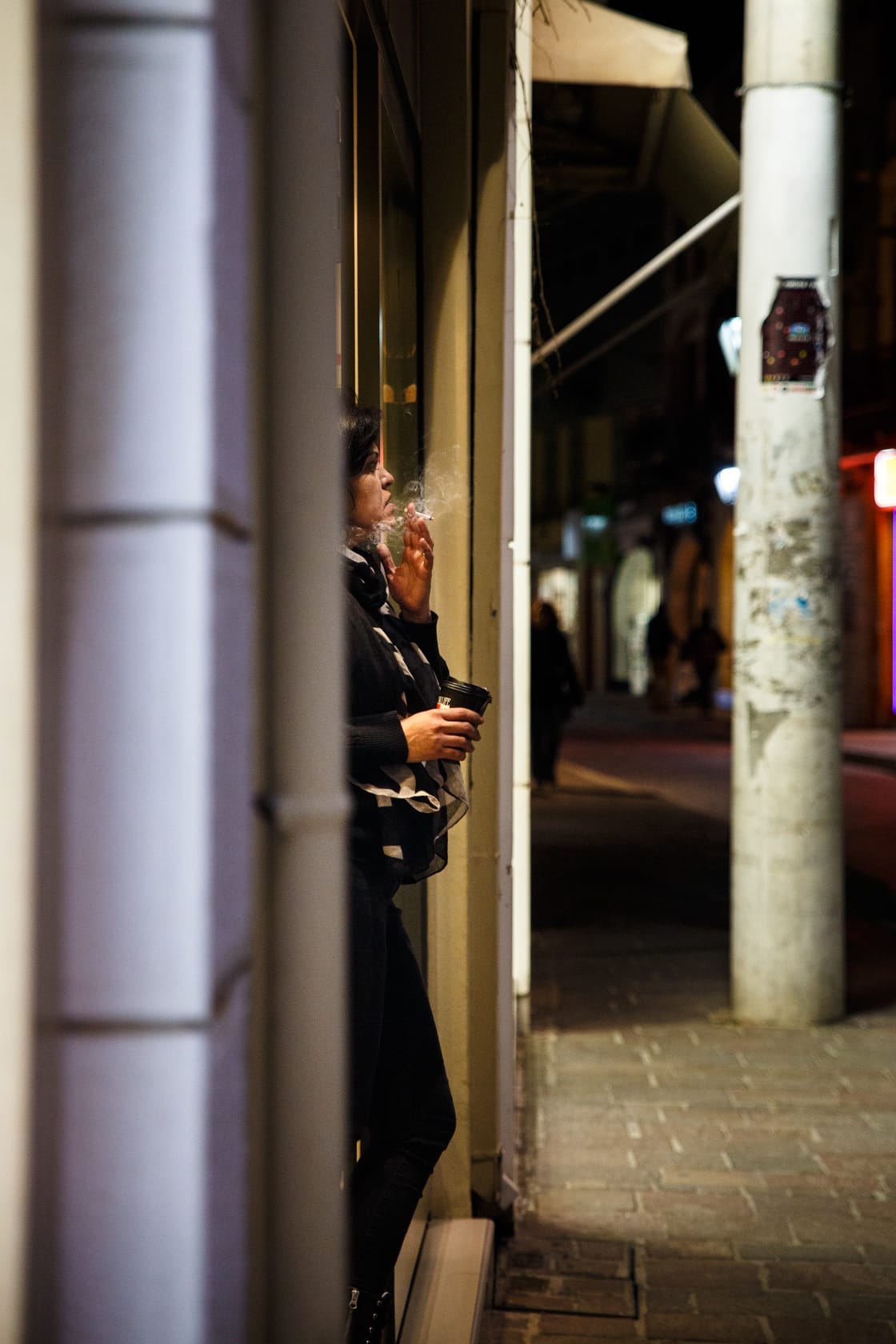