Movies are a great way to take inspiration for your street photography. A truly great movie will be a piece of true escapism for the viewer, as they are immersed wholly in the experience and world the director is presenting them with via the magic of sound and vision. A brilliant movie will leave the viewer with a stream of memorable scenes that will leave a lasting impression. The sheer complexity and cost of movies means that each scene is planned and arranged down to the last detail, and when you watch a well-made movie with a critical photographer’s eye you can start to spot all sorts of hidden details and elements in each shot. With thought and practice you can use what you spot to inform and better your photography. The incredibly fluid nature of street photography means that a street photographer doesn’t have the luxury of time to plan their photos – you need to be able to act fast and instinctively. By improving your visual and artistic literacy through watching and analysing movies you can ensure that your brain remains sharp for when you are able to hit the streets and start shooting.

The movie I will focus on is Michael Mann’s 1986 masterpiece Manhunter – a gloriously evocative piece of ‘80s cinema that is the epitome of style thanks to its stunning visuals and pulsating rock and pop sound track. Manhunter was the first and most pioneering cinematic adaptation of Thomas Harris’ Hannibal Lector novels but enjoyed only modest commercial success, and a complicated gestation owing to the perfectionist approach to its filming. Unlike its 2002 remake Red Dragon, Manhunter focused more on the procedural investigative chase conducted by its main protagonist Will Graham as he pursues a serial killer, and the psychological toll it takes on him. Manhunter director of photography Dante Spinotti speaks at length about the creative process behind the movie visuals in this interview, and in particular how he and Mann sought to create a sense of tension and unease through the use of meticulously planned scenes and lighting.

I will select and analyse three scenes from the movie and describe with examples how they have influenced my own street photography.

This shot from the start of the movie is one of my favourite shots ever from cinema. It’s a wide to normal shot that is beautiful in its simplicity and minimalism. Shot from head on, the scene is dominated by the two horizontal lines that mark the delineation between sand, sea, and sky. These three elements help to break up the visual weight of the background of the scene. Beginning to analyse closely, you can see that the still image adheres to the advice regularly given to photographers when composing – to place lines slightly off centre in order to create a more visually interesting image. In this case the heavy line that marks the horizon line between sea and sky falls roughly one third of the way up the image – in keeping with the oft quoted ‘rule of thirds’ approach to composition. See also how Mann has used the branch as a point of interest in the centre of the image, and how it interacts with the main focal point of the scene – the characters. The shape of the branch forms a fantastic sweeping curve reaching its highest point just where the horizon line is. This is no accident, and is symptomatic of the attention to detail taken by Mann and Spinotti towards framing and composition throughout the movie. If the branch intersected the horizon line it would prove a distracting element in the image and would ruin the minimalism of the shot. As it stands, the colour of the branch provides a nice link to sand at the base of the shot, while its curve forms a bridge between the stark, straight geometric lines of the horizontal landscape and the characters at the heart of the scene.

The positioning of the characters is totally crucial to the success of the scene and something that a street photographer must always consider. Both characters are spaced well apart, with the empty space between them (referred to as negative space in art terminology) telling a narrative story of its own (the two characters have a complicated relationship at the start of the movie). The poses of the characters also make the scene interesting as they are facing in different directions and looking in different directions too – we see one in profile, the other looking down. Throughout the whole shot neither actor has their head positioned looking towards the other. While as street photographers we do not have the luxury of posing our subjects, we can at least seek to look for a ‘decisive moment’ when our subjects are interacting with each other in a visually interesting way. 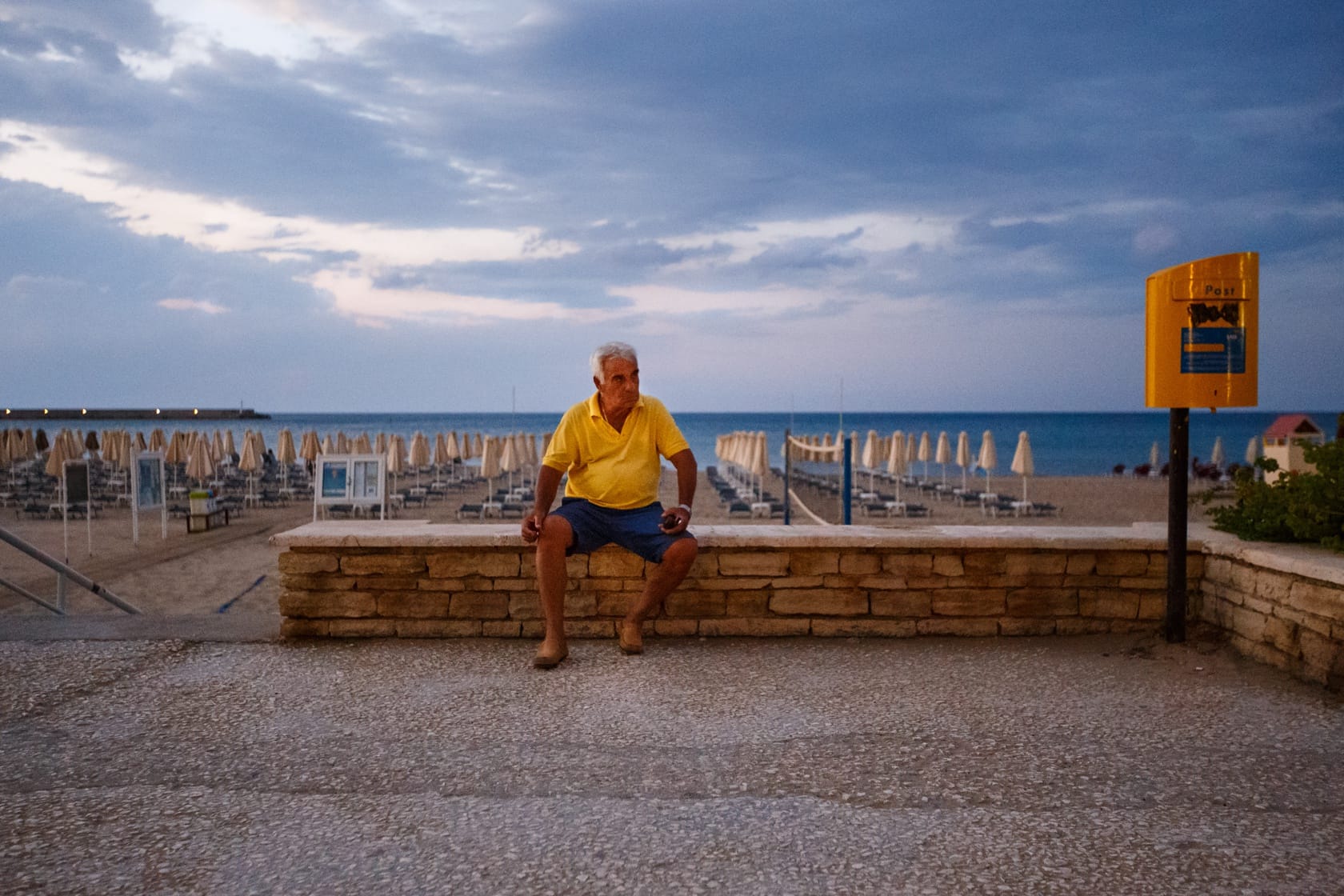 My photo doesn’t share the same brilliant simplicity as the frame from the movie, despite me constantly attempting to recreate the movie shot. Near to my house is a beach promenade that is a very popular place for people to sit. If you get the angles right you can achieve some great horizontal lines with the wall, beach and horizon cutting across the frame. For this shot I was lucky enough to be presented with a cloudy twilight sky for extra impact, while the man’s yellow polo shirt matched the yellow in the post box nicely too.

This is another immensely powerful shot that is full of drama and power. Much of the cinematic power of the shot is down to the fact that Mann and Spinotti chose to use a wide lens here and shot from a low angle. The wide lens means the viewer has a sense of the whole scene, with the background playing its own role in the mood of the moment. Likewise, the low angle means that the imposing archway appears to tower over the character in the centre (as well as the watching viewer to an extent), which makes the scene even more foreboding.

As well as the archway, the rest of the street plays a highly important role in creating the feel of the scene, which is something a street photographer should be mindful of when looking for shots. Note how the three streetlamps are perfectly symmetrically weighted in the shot, with a strong ‘M’ shaped leading line that links them dominating the image and the ‘point’ drawing attention down to the character in the middle of the street, while the the light coming from each lamp really adds to the drama of the scene. Like the streetlamps and archway in the foreground, the strong pool of light from behind the arch is designed solely to draw attention to the solidarity figure as the focal point of the scene. The lighting is perhaps the most crucial part of this shot – the strong differences between light and shadow give the scene a high contrast look (an effect which is known as the Chiaroscuro technique in the world of fine art painting), and make it truly striking. The light coming through the arch makes a perfect ‘pool’ of light in the centre of the frame. While Mann probably utilised a powerful lighting rig above and behind the archway to achieve this effect, there is nothing stopping a street photographer from seeking out artificial light sources from streetlamps or shop fronts and metering for the light in these to achieve a similar effect. You can pick a similar scene with an archway and powerful backlight and wait for that perfect moment when your subject enters the frame at the right moment. 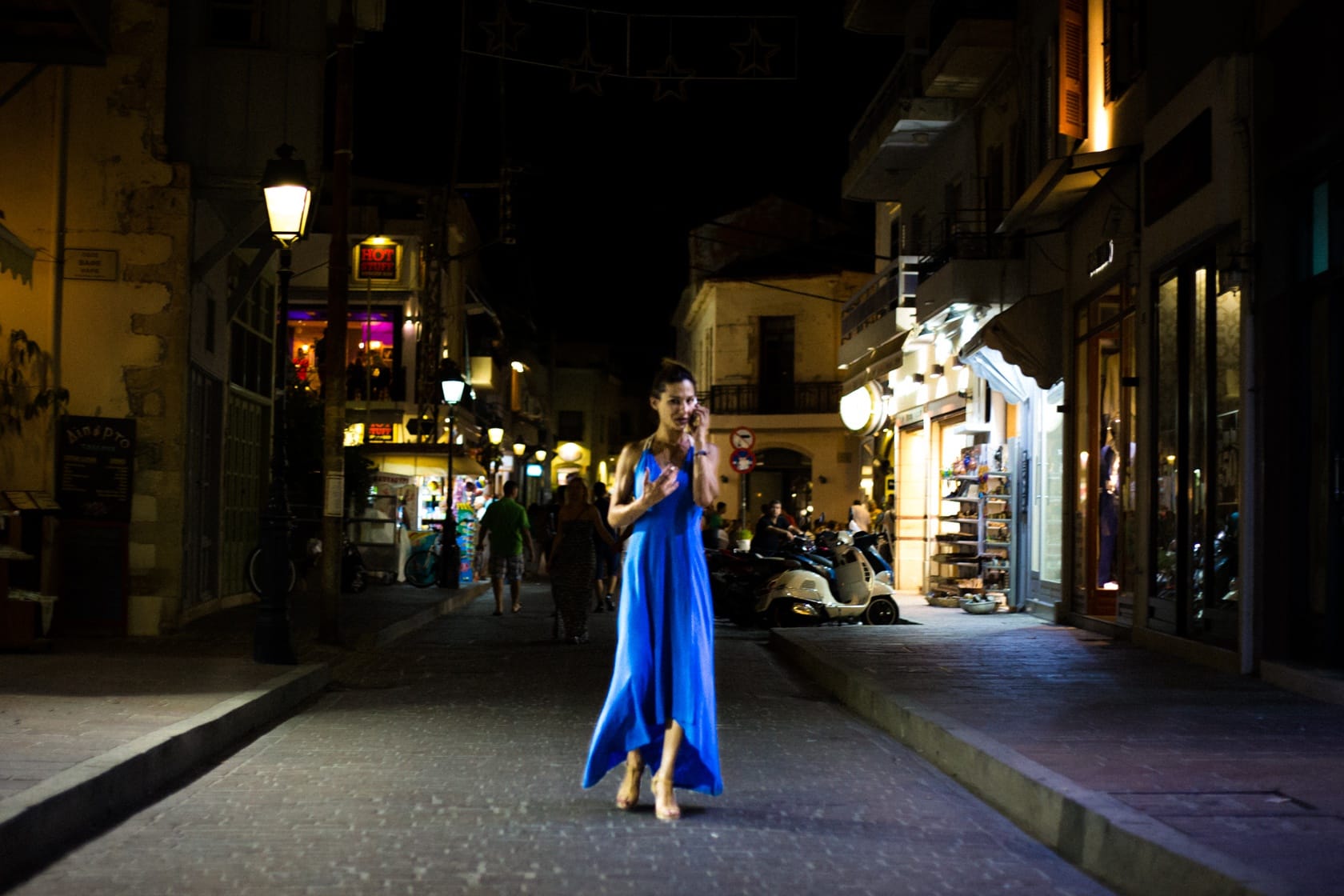 Again, this photo varies somewhat from the movie still, but it shares some similarities in the way a single character in the centre of the frame is walking towards the camera and is the focal point of the image. I crouched down a bit to shoot this image from a slightly lower perspective than I might otherwise have done to put more emphasis on the woman in the blue dress. Unfortunately the lighting wasn’t nearly as simple or powerful as in the movie, though I was still able to use the street lamps and shop lights to add extra drama to the image. In a perfect world of course there would be extra backlighting, and maybe even an archway!

The final scene that serves as an interesting source for street photography inspiration is this one of the main character Will Graham fleeing the prison after visiting its inmate Hannibal Lecktor. The director uses the stark white interior of this modernist building as a key part of his scene – note how the 3 parallel leading lines of the stairs intersect the shot to lead the viewer’s eye across the frame. The building’s white interior has a strong disparity with the main character’s dark outfit, so as he runs he appears as just a black silhouette, contrasting starkly with his background. The movie scene is a very memorable one as Graham runs down the stairs in circles, appearing and reappearing as he gets closer to the exit of the jail and his salvation in the freedom of the outside world.

A still of this scene becomes almost Henri Cartier Bresson-esque, with the character blurred in motion against his brilliant background. In street photography you can look out for moments like this – look out for a simple, interesting and plain background and wait for a single lone figure to move across it. Either set a slow shutter speed and keep a steady hand and capture them as a moving blur, or set a fast shutter speed and capture them mid stride, ‘frozen’ in time. 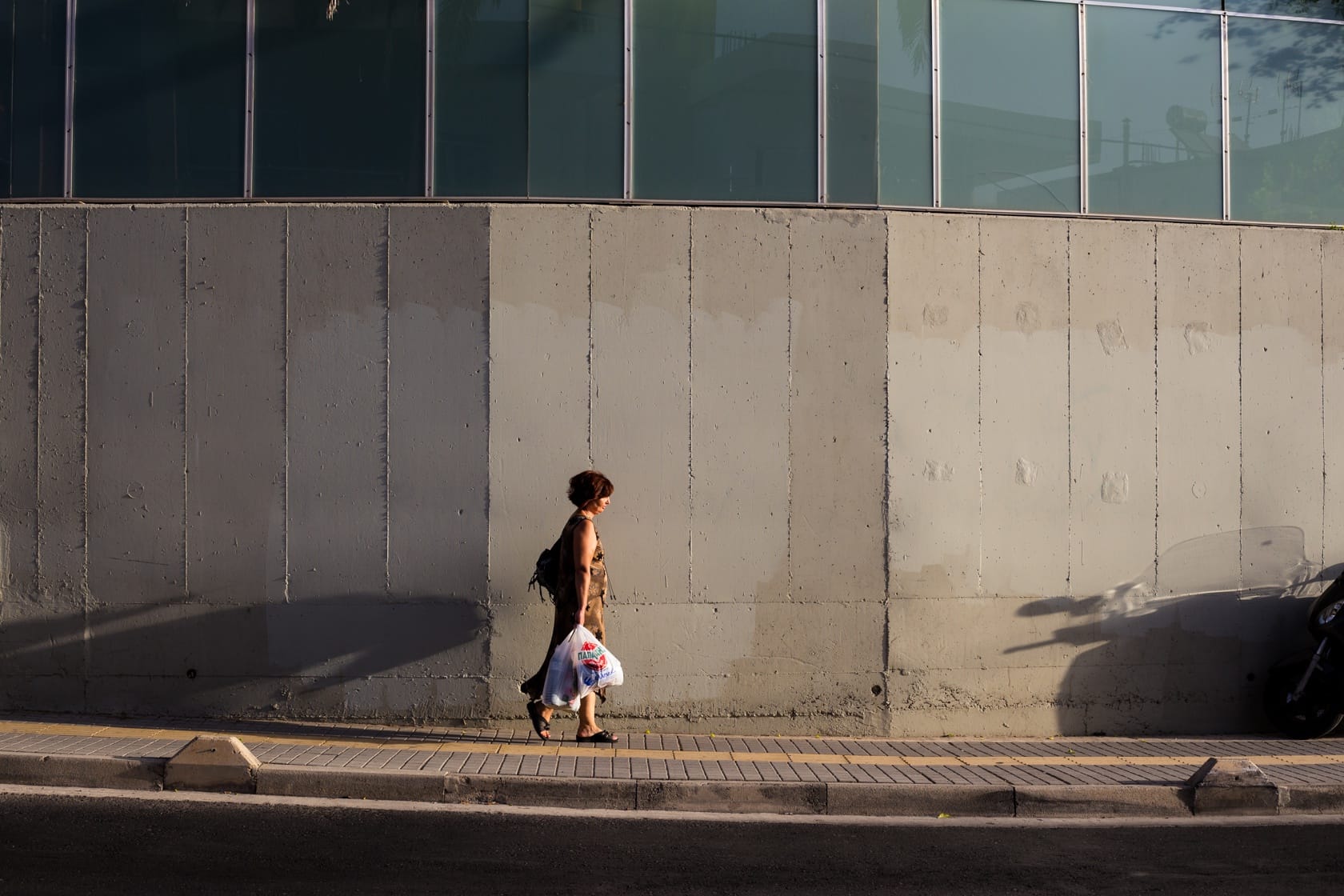 I shot much closer than the Manhunter still for this photo as I was using a 50mm lens, and so the subject is unfortunately much larger and more prominent in the frame. As with the movie still, my attention was drawn first by the background – this case a brutalist modern wall in concrete and glass, so I waited and waited until I saw a person approaching the wall. As they stepped into the frame I was able to snap them mid stride. The lighting was what really made the shot for me – the low autumnal sun and long shadows really added a sense of drama and interest to the image.

I hope you’ve found these few examples from this movie useful as a springboard for some inspirational street photography work. I can’t recommend Manhunter enough – it is truly a cinematic tour de force, and each scene is meticulously honed as a piece of visual art. By watching an artfully shot movie like Manhunter not only will you be entertained, but also motivated to go out and create some photos, which is really what great art should be driving us to do – go out and push ourselves to create more!!!