Street Photo of the week by Romeo Dumpit a.k.a. Dizzy Cow

Romeo Dumpit a.k.a. Dizzy Cow is a Street Photographer from the west coast of the USA. He lives in California. Romeo is an active member of our GooglePlus Street Photography community called the SHRC. He is a frequent contributor, posting almost regularly and also comments quite often on other peoples work. Everyone in the SHRC knows him as one of the film guru guys. He is 100% analogue. So, if you have a question about types of film development, film emulsions, analogue cameras and anything that has to do with the awesome world of film, then you know that Romeo can help you out. But he isn’t just someone that knows his film. He is also a talented Street Hunter! He shoots both B&W and Colour film that he rolls and develops himself. He has a great understanding of light and knowns how to get the results he seeks through a combination of the correct film, the style of development and the camera gear he uses! Hats off Romeo! Keep up the great work! 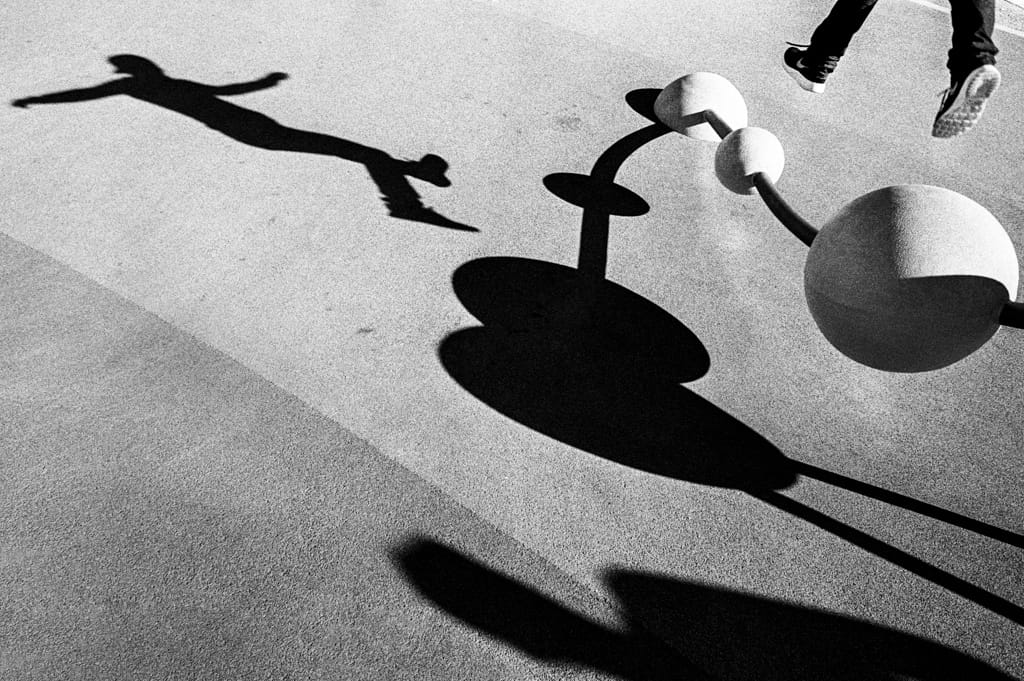 This photograph by Romeo has been shot using the Kodak 5222 motion picture negative film, that has been respooled and shot as 35mm film. This is one of my favourite Romeo D photographs. At first glance the viewer sees the boy’s shadow jumping in the air. The boy’s shadow seems to be hovering over another black shape, a shape that looks like planets, giving the picture a sense of motion. No doubt this is what inspired Romeo to name his photo “Planet Hopping”!

Moving along the photo, the viewer’s eye glides from the intense black shadows on the left to the other elements on the right of the screen and notices the structure that makes that funny planet-like shadow. An instant later the viewer’s eye lands on the feet of the boy that is the source of the shadow seen initially on the left. The boy is in the air, jumping, frozen still. His shoes and a small part of his trousers, are the only little proof of his existence. An existence that makes the photograph more alive. It gives the shadow real life, it animates it.

But not only the content of the photograph is interesting. I also enjoy this capture’s angle because it makes viewers put some extra effort into understanding it. Photographs that do that to me, are always a joy to view!