In doing the Under The Influence series, I keep discovering groundbreaking, game-changing and thoroughly inspirational photographers. However, upon returning to research, I’ve noticed that I’ve been geographically naive. All of the greats I have written about have been either from the United States or Europe. That is an example of terrible nearsightedness. There are fantastic street photographers all over the world and some walk among us right now, pushing the genre and influencing us and others. And perhaps even more importantly, they’re making the world a little bit smaller. They’re showing us environments we’ve never seen or may never see. Giving us moments from the everyday lives of people and cultures that we know little or nothing about. Or better yet, of people and cultures we think we know something about.

With that in my mind, I thought about this spinning ball we’re all aboard and instantly, the Far East came to mind. Specifically, Japan. A country that has always fascinated me, but yet I know so very little about. And who better to seek out than the “stray dog” himself, Daido Moriyama.

Daido Moriyama, 76, is widely regarded as the father of Japanese street photography, and rightfully so. But Moriyama was different from his predecessors, the masters of street that came before him. He disregarded the idea of the “decisive moment” and notched out his own style. Not just becoming the father of Japanese street, but a pioneer and a master in his own right.

Moriyama started his photographic career in the early 1960’s primarily depicting the darker side of Tokyo life and the post-war westernization that was becoming more and more prominent in the country. His style began to take shape in this period. His work was featured in Provoke magazine and the are, bure, boke (grainy, blurry, out of focus) style he and the other photographers used rocked the photographic world. Moriyama pushed the style further after that with even starker contrasts and wilder compositions. His 1972 book, Sashin yo Sayonara (Bye Bye Photography) was his parting shot at traditional photography. For that period, Moriyama pushed his work to the edge. He had hit a creative roadblock. Moriyama was bent on destroying the medium and moving on.

But he returned to photography and leaned toward a more classic feel, but his signature monochrome style remained. His stark contrasts being an example of this. Moriyama became prolific and hasn’t let up. After dozens of books and exhibitions worldwide, he is respected and admired throughout the photographic community. And not just for his street photography, but for work like his erotically-charged “Tights”. He even shared an exhibition with an inspiration of his, William Klein.

And the “stray dog” still walks the streets to this day, seemingly, out of necessity.

“The crushing force of time is before my eyes, and I try to keep pressing the shutter release of the camera. In this inevitable race between the two of us, I feel I am going to be burnt up.” 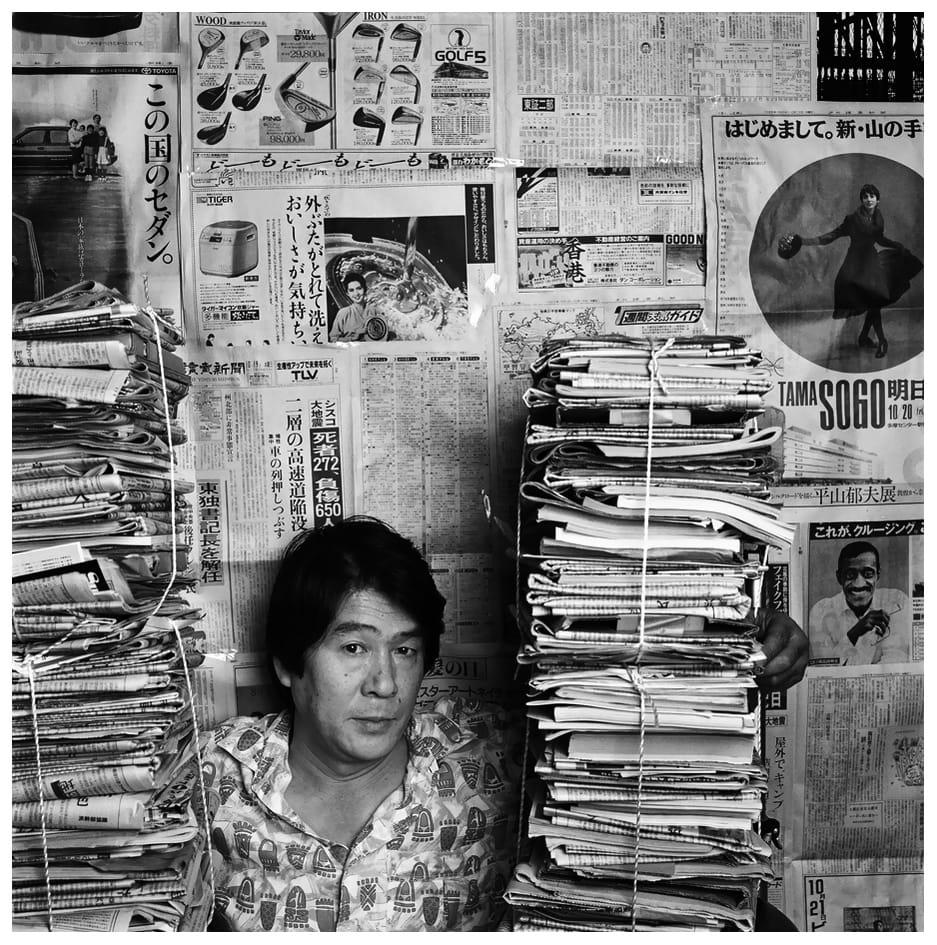 To be honest, I didn’t “get” Daido Moriyama at first. His work, with the first few images I saw, seemed to be sloppy. Like it had no real direction. The grain. The blur. The overexposure. It all just seemed like it was trying too hard. Too hard to be “art”.

But then it clicked. I felt it.

Listen, I am, by no means, an art critic. Or a connoisseur, any authority on photography. With photography, in a way, I seem to like it simple. I tend to prefer an immediate impact. A person. A place. A scene that requires little interpretation.

But Moriyama doesn’t operate that way, and his are, bure, boke style surely wasn’t my cup of tea upon first inspection. But as I want deeper, it connected. Moriyama had made me feel his style. Even though I was somewhat less than objectionable, it had come to me. And it wasn’t just the subject matter. More importantly, it was the sum of all the parts. The compositions, the abstract feel, the monochrome. The immediacy of the moment snatched that makes it somehow feel more real. And the sum of all these parts is his style.

As Moriyama produced more “classic” style street photography, his trademark feel never left. The work isn’t necessarily as blurry, grainy, blown-out or dark. But it is, undoubtedly, and without prior knowledge, identified as Moriyama’s. And for myself, that is the nucleus of his influence.

Moriyama was bent on destroying photography early on, but with that was born something greater. His style. And that style, even though it seems to continuously evolve, remains decidedly his. And from this I can easily take away one thing… perseverance. His tenacity.

To have basically walked away from photography only to return and become a master is nothing short of amazing. I’ve been on the ropes, frustrated with my work and ready to bail on photography, but I just can’t. I love it too much. Moriyama loved it, too. That’s why he couldn’t stay away. His style was born from the love. Love of photography. Love of the city. Love of the hunt. Love of the dark side of life. Moriyama was ready to forsake that love. But he couldn’t. He got back into the game and worked harder. Embracing the desire and letting it fuel his work.

His perseverance made him the master he is today. It honed his skill and made him an even hungrier stray dog.

We should all stay hungry.