Street Photo of the week by André Kertész

One of the most iconic figures of Photography that ever lived was the Grand Master André Kertész. Experimental by nature with a great understanding of the light, André Kertész managed to shine in the photography world at the very early stages of his career. He was born in Hungary in the late 19th century and was hugely recognised by his contemporary fellow photographers as a highly experienced and unique artist. The way he manipulated light and composition was way ahead of his time. He first started taking photos at the age of eighteen in Hungary and then continued taking photos after that for the rest of his long life. In the 1920’s-1930’s he rocked Paris with his amazing captures of the city so much that his work was published many times and he captured the attention of writers, fellow photographers and more. André Kertész managed to captivate his viewers through his interesting angles, his light, his compositions and his feeling. His photos were truly art and he would create that art anywhere. In a foreign country, or from his balcony it made no difference to him. He always managed to capture an unforgettable image.

You can read more about André Kertész’s life in Andrew Sweigart‘s excellent post “Under the influence of André Kertész“. If you have missed it, make sure you click on that link and give it a read.

Unfortunately I couldn’t find the whole body of work of the amazing André Kertész in one single website, so I recommend you do a search for “andre kertesz photography” on Google and take a look there. I also, highly recommend you watching the episode on André Kertész from the 1983 BBC mini series “Master Photographers”. You can watch it for FREE on YouTube and you can find the link on our post “16 Photography Documentaries every Street Photographer should watch”. 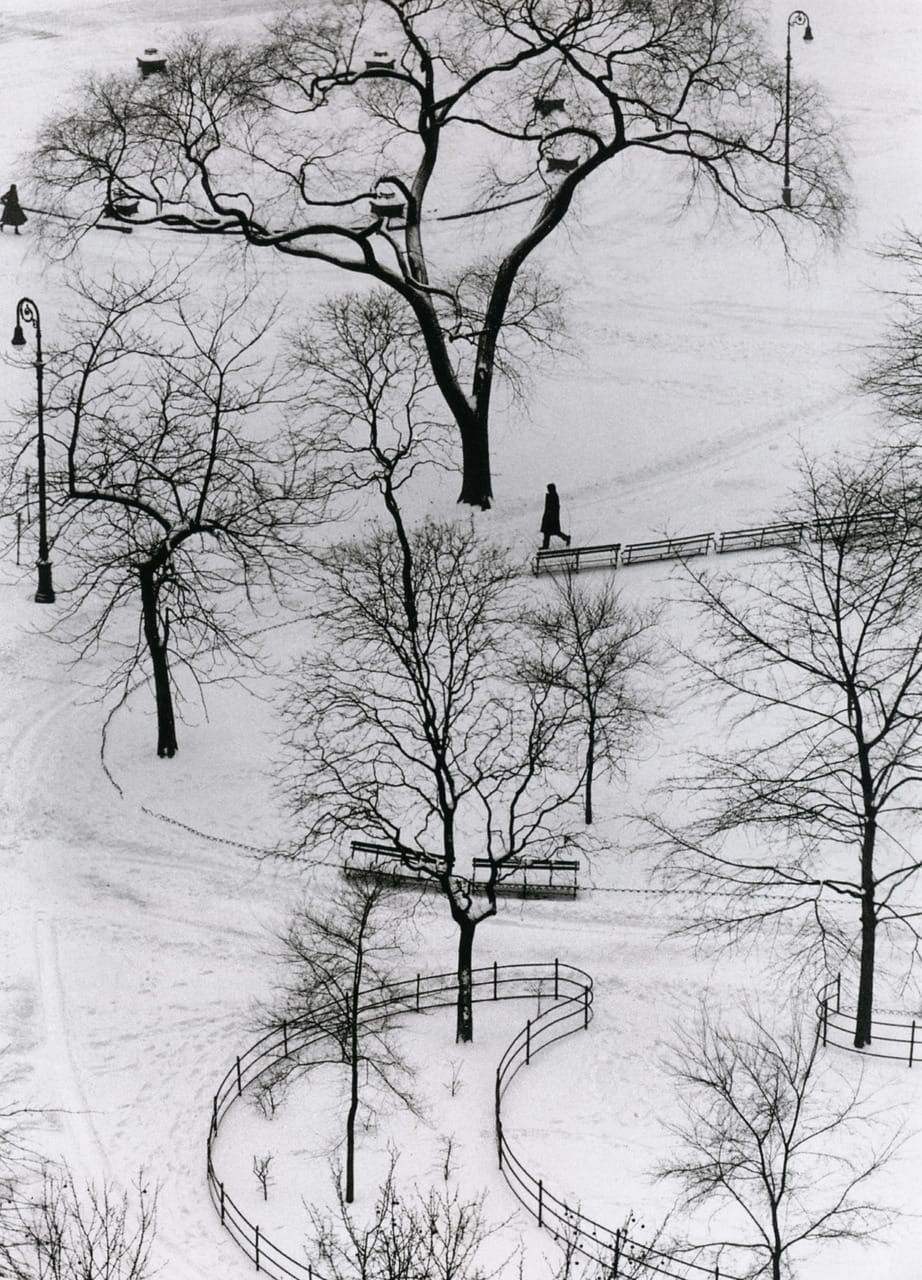 This photograph is from the personal collection of André Kertész, shot one snowy day from the 12th floor of his NY apartment. He used to make photos from his balcony many times, using different angles. He had shot Washington Square quite a few times, but this is the best one as far as I am concerned and one of his best photographs overall. Even though the photograph had been shot from a distance, André Kertész made sure to wait until the perfect moment when everything was aligned the way he wanted it to be. Everything in the photograph is intentional or should I better say arranged purposefully. The framing, the composition with the placement of the trees and the two individuals, as well as the C line made on the snow from the frequent passers by. Any other time of the year, those trees would have been full of leaves, not permitting for such an image to be made. The snow would not have been there to turn the trees and the people into silhouettes and to be used as a canvas for that lovely curvy shape, that acts as a guide for the viewers eyes, helping him/her understand the path the people are following.

Thank you very much André Kertész!