I succumbed to peer pressure. Analog bullying, if you will.

I bought a film camera.

You might be saying, “pfft, what’s the big deal?” Well, it is a big deal. I’ve been a digital loyalist from the get-go. I’ve triumphed the ease and convenience of digital cameras for over a year. It’s all I know. Now, in my second full year of being “into” photography, it’s all I’ve shot. An Olympus e620 and the wonderful Sony NEX 5n and 6 cameras. I’ve been so in love with NEX cameras, that I believed I’d never stray. I own three prime lenses, the Sony 35mm and 50mm 1.8 and the Sigma 30mm 2.8. I love them all, but the 35 stays mounted most of the time. The NEX 6 and these lenses still surprise me to this day. How can this quirky looking camera and these relatively inexpensive pieces of glass produce great images with a novice (yes, I still consider myself a novice) behind the lens?

And the speed and ease of it all. Everything is fast. Fun putting the camera up, to downplaying the images and then to editing.

Ah, editing. So easy. I just adjust a few sliders in Lightroom and voila! Done! And I know squat about Lightroom. I’ve only been using it for a few months and really have no idea of what it’s capable of. Someday, I’ll get on that. I have a book. The free time I have, if not spent shooting, is looking at images or reading about great photographers.

So why, why did I buy a film camera?

Just like the title of the recurring blog I write, I was under the influence. The Influence of great photographers of the past. Of my partner in crime, Spyros. Of the members of the www.streethunters.net Reader’s Community (the SHRC) on Google+. The titans of the past and these current film junkies have bombarded my eyes with wonderful work.

I’ll be honest, I’m a pushover usually. But I was determined to stand my digital ground as I listened to Spyros extol the virtues of film. And as I read how others wrote how much better film it’s than digital.

But as time passed, it hit me.

I was digging on Spyros’ unbridled enthusiasm and passion for film. And not just his, the other purists that pushed the analog gospel in the SHRC.

Why be so stubborn???

Film was romantic. I’d seen it. I knew it. It has a richness, and a grittiness, that’s undeniable.

It’s classic. It’s timeless. The work that all of the greats I had researched and loved for Under The Influence was almost exclusively shot on film.

Not only that, it’s the artisan aspect. The craftsman-like quality of shooting film. I wanted to experience it. Not that there isn’t an artisan aspect to shooting digital. Analog is different. It’s more hands-on. And I really was enamored with that. Now, I knew I wasn’t going to jump into developing my own film. The time, the space, the money… it just isn’t there right now.

There’s film cameras everywhere! Ebay. Online camera stores. Craigslist. All kinds. And all kinds of money. Get away from the Leicas and there’s thousands of choices. I don’t even go through the names, you know them.

I read and read. I gawked. The beauty of the internet: so much information on these machines. Over time, I narrowed my choices. My criteria was the following. It had to be small. It had to be reliable. It had to be in the $100 USD area or less. Maybe a rangefinder. Looks certainly didn’t matter. I own a NEX!

The Yashica Electros were the front-runner for a while. This mostly due to Spyros’ praise and their availability. I liked what they were capable of. One thing I did notice, that prices on the Electro series cameras seemed to keep creeping up on eBay. Perhaps others were bit by the bug as well?

But then, I saw the one. 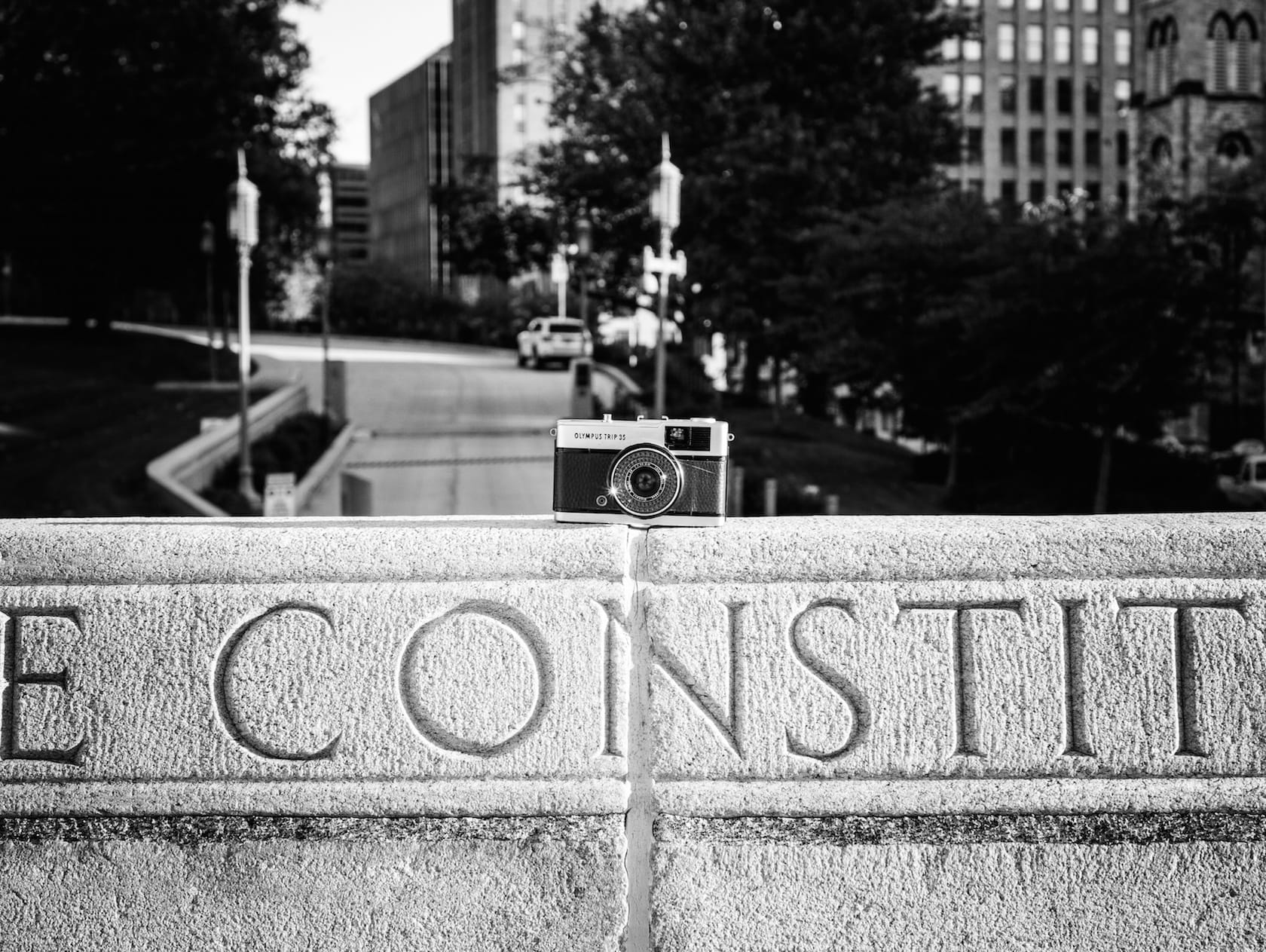 I can’t even put my finger on it, but I was instantly love-sick for the thing. I dug in hard finding out all I could about this camera.

I read about it. I combed through the Flickr gallery dedicated to it. I fell harder and harder for the Trip.

As I researched, a name I recognised popped up again and again. Stewart Duffy! A member of the SHRC and the owner of StreetShooters.co.uk! Not only did he shot a trip, he refurbished them!

So, I reached out to him and began picking his brain. The questions I had about the Trip, he graciously answered.

But first, these were the things I liked about the Trip 35.

No batteries! That funky-looking area around the lens is packed with selenium cells! That’s what powers the light meter! Nice! It’s mechanical and rugged! AND it’s Zone Focus! 40mm lens? Right in my wheelhouse. Limited controls? Hell yes, I don’t know what I’m doing. 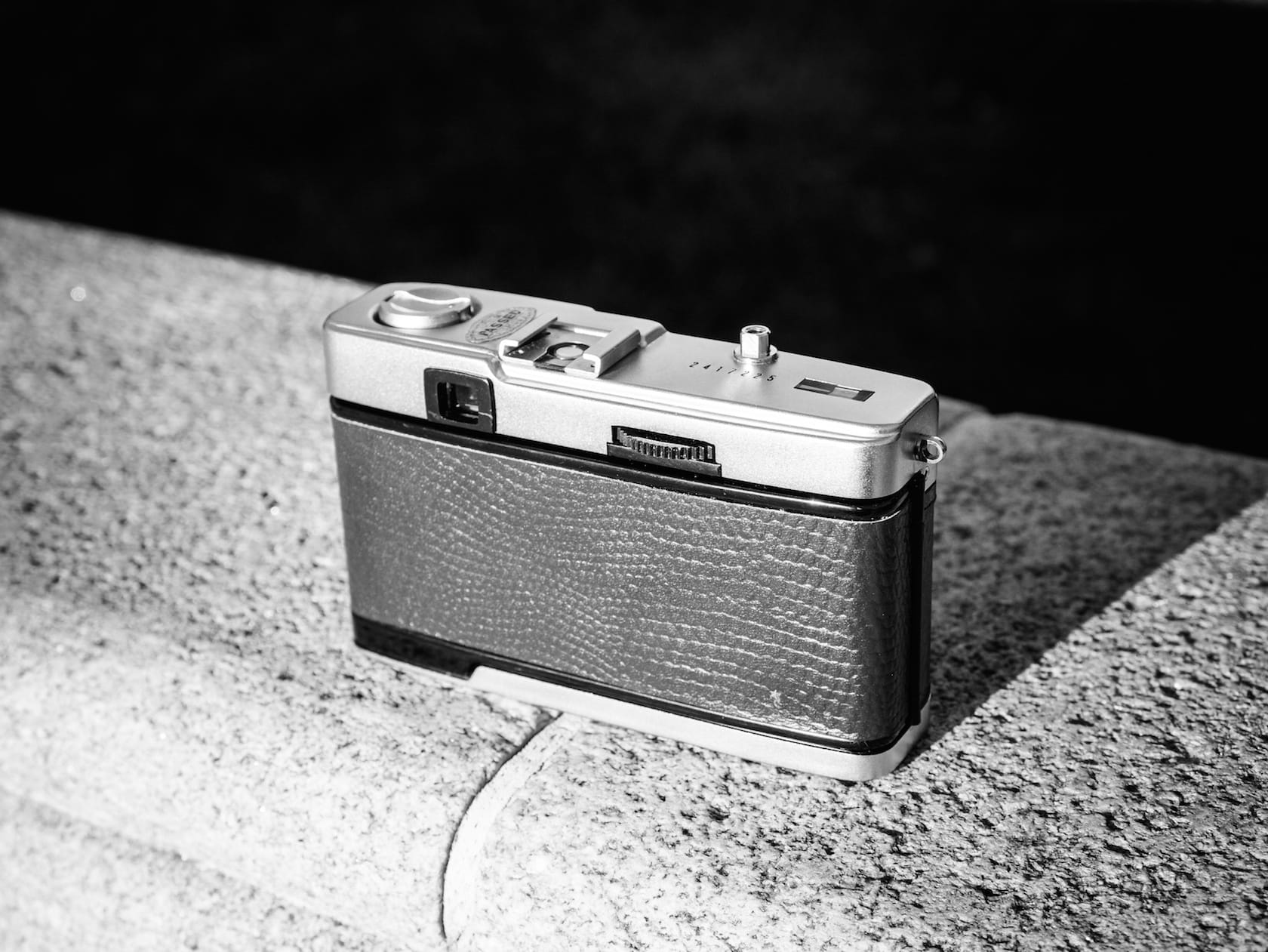 And, it was an incredibly popular camera. From 1967-1984, Olympus made over 10 million of them! That is a lot of cameras. Obviously, Olympus had a winner.

Then the stars aligned.

Mr. Duffy just happened to be sitting on a Trip that just needed a little cosmetic finish. He said if I wanted, I could buy it from him.

I think you know what happened next.

Something old, Something definitely new

I pulled the trigger and the Trip was in its way across the ocean. I was giddy. Seriously.

When I got the package at work, I tore it open like a kid at Christmas. Wrapped in bubble wrap was the prize. It was beautiful!

It looked like new. The Trip felt solid in my hand. The weight felt reassuring. I wound the thumbwheel (no lever) so I could fire the shutter. I was rewarded with a beefy click.

Man, did I want to shoot right then and there, but the film I ordered was at home. It would have to wait.

Just like you’ll have to wait to hear what I have to say about my first film experience. And to see some images, of course.

But I’ll give you a teaser. When I got home and loaded my first roll of film, ever, the feeling was something I never felt when inserting a SD card into the NEX.

I’ll be damned if it didn’t feel… sexy.