NOTE: This is a Guest Blog post written by Mauricio Hernández (a.k.a. Mavritivs) for www.streethunters.net

*** The Nikon 1 (CX Mount) lenses have a 2.7x crop. Keep this in mind when looking at the exif data of the following photographs. ***

When the J1 and V1 were released, many complained about the sensor size being too small. However, it seemed that most of the negative reviews came from people who did not own or had not used the cameras at all. Everyone who did own or had used them, seemed to love the system. Fortunately, I bought the V1 a couple years after its release which enabled me to enjoy a more mature system with some improvements and wider selection of lenses. At the moment, I own the V1, V2 and V3 cameras along with 5 lenses and the SB-N5 flash.


When I first bought the Nikon V1, I was just getting into street photography. At the time, I was shooting with a D700 and D7000 but quickly realized I did not like shooting with a DSLR on the street. I thought I needed something smaller and stealthy since I wanted candid shots. Months later, I realized there was more to invisibility than just having a small camera, but it did most of the job with ease. Shooting with a small camera relieved me of many insecurities such as feeling like I was chasing people with a DSLR. With the new camera I was able to get closer to people without being noticed too often. Sure, some people still noticed a camera in my hand, but my subjects were for the most part unaware of being photographed. Its small size and inoffensive looks acted almost like a ticket to entering places I could have not freely carried a DSLR.

A few months into the V1, I then bought the V2 with the 10-100mm lens. The new camera and lens instantly became my favorite set for shooting street. With this new lens I was able to “snipe” from a distance and get even more candid shots. It may not be tradition to use such a zoom lens for street, but I frankly do not adopt the view of restricting myself to one prime lens into an unpredictable and fast environment such as the street. In fact, out of the lenses I own – and I do own the 32mm f/1.2 – it is the sharpest of them all. Most other zoom lenses of this range tend to get soft and have poor picture quality, but not this lens. There are times when I will only use a 50mm equivalent lens, such as at night or crowded areas like a festival or indoors. If the area is too crowded, I will pull out the 28mm equivalent lens instead.

(Regardless of my lens choice or lens sharpness, it is important to know what different focal lengths look like before putting one’s eye to the viewfinder. When shooting with the zoom, I set the focal length using the markers on the lens before bringing the camera to my eye.) 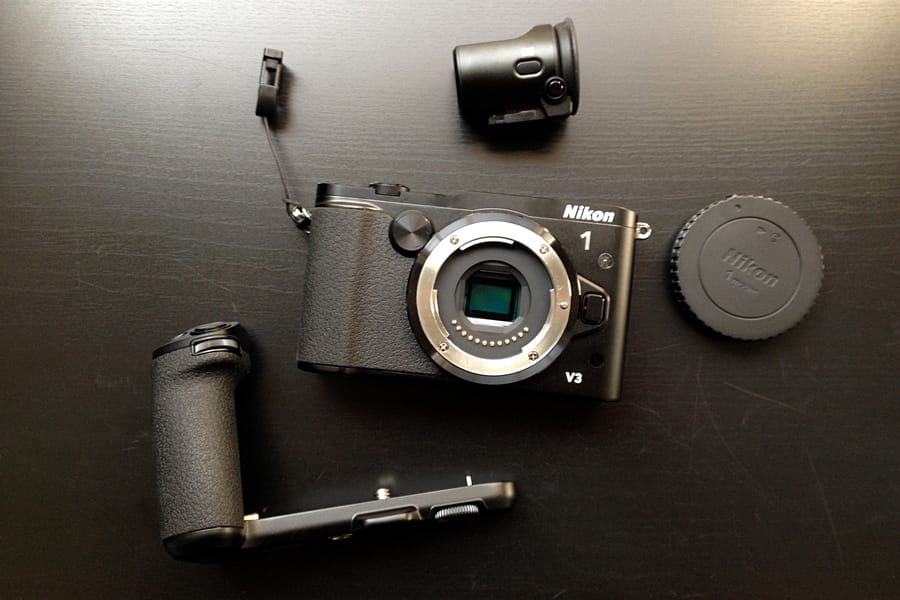 Lastly, I have recently purchased the latest “V” camera, the V3. This is probably the most different of all the Nikon 1 cameras. The design is very modular in nature. The viewfinder is detachable and there is also a grip one can attach to improve ergonomics and functionality. I do not care much for the grip, but the viewfinder has a very solid feel and good resolution. Most of the changes and upgrades to the “V” series in the V3 are good when it comes to hardware, picture quality not so much. Two upgrades after the V1 and its picture quality has not even been matched. It is such a pity since the unique files of the V1 is the main factor that drew me to this system. The one thing I do like about the V3 over the other two cameras is the tiltable touchscreen. I have always hated shooting blindly from the hip. Now thanks to this feature, I can frame all my shots even from the hip.

(Forums around the internet have described the look of the V1 files as “film-like”, and I agree. I only have one picture taken with the V1 in this article, but I have more pictures in my portfolio using the V1. Alternatively, there are probably many examples on the internet that illustrate and take advantage of this look better than my own pictures.)

If I had to summarize the advantages of the Nikon 1 “V” cameras it would be the following:

I do realize the system is not perfect, no current system really is.

Do I wish the sensor were bigger? Yes.
Do I wish for a better lens selection? Definitely.
Do I wish there were a sexy, retro model? Absolutely.

There are also a few things that could be addressed with firmware updates, but I really doubt Nikon cares enough.

Would I recommend this system over m43 or Fujifilm, probably not. However, if you are a Nikon shooter, I do think this system is worthwhile especially if you own professional Nikon glass. Not only that, but the files do have a unique look which you may like as much as I do. And while there is still a possibility of switching systems in one way or another, these cameras have their own advantages and have never let me down.