Home Masters of Photography Under the influence of Robert Capa

I’ve referenced the Magnum Photos cooperative often in this weekly series, and with good reason. The amount of iconic images produced by it’s members is simply staggering. The members themselves, also iconic. Over the years, the cooperative has become the benchmark for greatness in photography.and it shows no signs of decline our slowing down. I’ve wrote about members such as Elliot Erwitt, Bruce Gilden and Martin Parr. And also about one of it’s founding fathers, Henri Cartier-Bresson. All of them giants of photography and massively influential. However, the most impressive member is one I haven’t touched on yet. The founder who had the idea that birthed Magnum, Robert Capa.

Capa’s legacy is simply fantastic and can be split into two. One, as essentially the creator of Magnum. And two, as the first and arguably the greatest war photographer/photojournalist of the last century.

Robert Capa(1913-1954) came up with idea for Magnum and founded the cooperative two years after World War II with fellow photographers David “Chim” Seymour, Henri Cartier-Bresson, George Rodger and William Vandivert. But before he sparked Magnum, he created himself. He was born Endre Friedmann in Budapest, but later created the name and the character of Robert Capa to hide his Jewish name(with the rise of Nazism) and to make a name that was more “Americanized” and familiar-sounding. It was easier  for him to sell photographs with the name and the fictional character he created.

And before Magnum he had become a legend by redefining war photography. Capa was in the trenches during the Spanish Civil War, where his famous “Falling Soldier” photo was taken. Incredibly, he was with the second wave of Americans to hit Omaha Beach during the Allied’s D-Day Invasion.

In 1947, he was the first photographer to take pictures behind Russia’s Iron Curtain when he traveled there with the writer John Steinbeck. That was also the year Magnum was born. Before the age of forty, Capa had done more than most photographers could ever dream of doing in their lifetimes.

Early in the 1950’s, Capa made the fateful decision to accept an assignment from Life magazine to cover The First Indochina War. In 1954, while traveling with a French regiment, Capa left the Jeep he was riding in to film the action ahead. It was then when he lost his life after suffering injury from stepping on a land mine.

As always, I strongly suggest you do your own research on this influential photographer, for I have only touched on his incredible life. 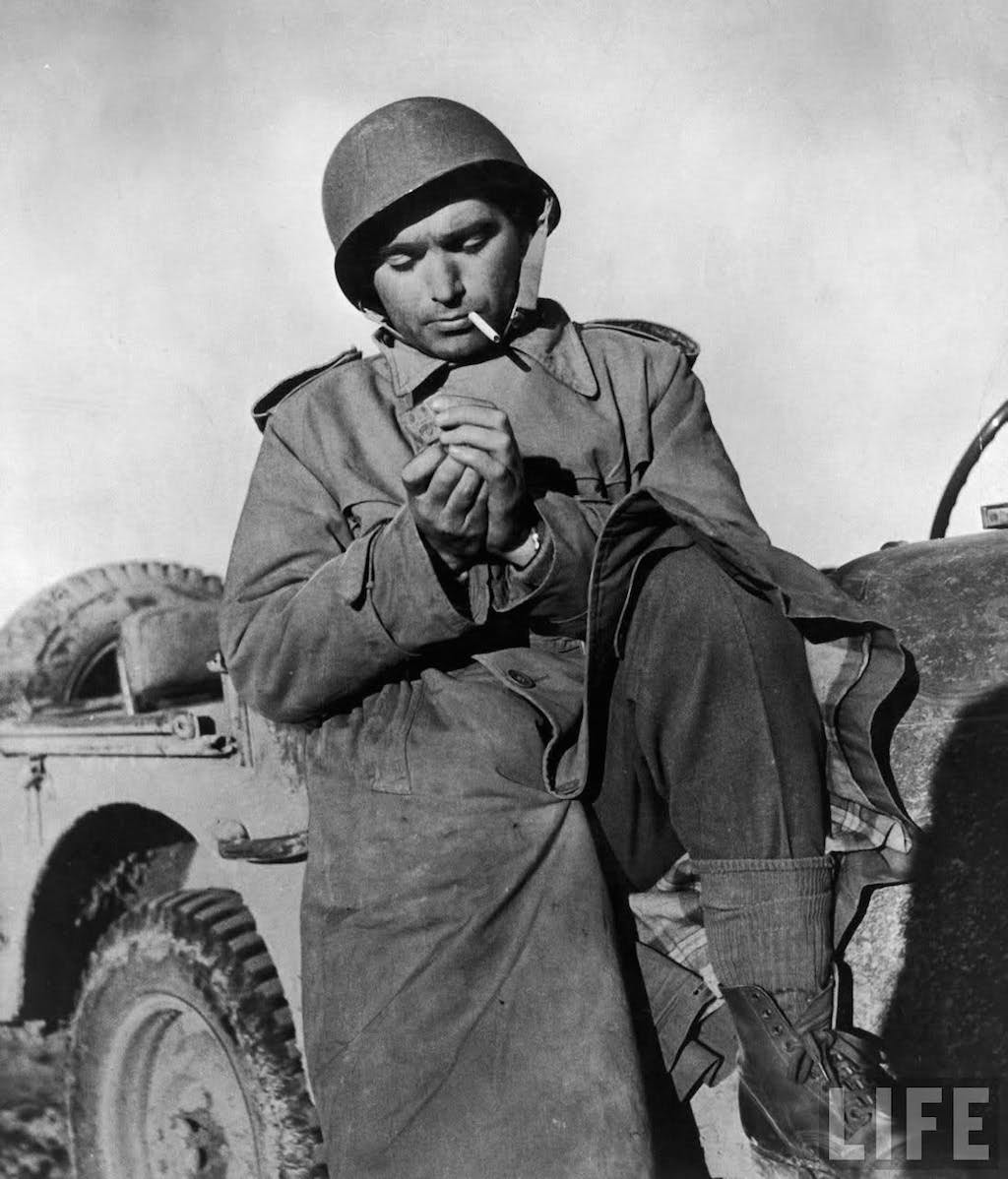 Comparing street photography to being a photojournalist shooting in the heart of battle is crazy, but as a street photographer we can be inspired by the bravery Capa demonstrated with his work.

Street photography does require guts. It takes guts when you first decide to try it. It’s intimidating at first, being out there. I remember from my own experience. No, there wasn’t bullets flying around. There wasn’t artillery firing or bombs exploding. But it was different than what I had done before, and any time you try something different and intimidating, it takes some guts.

Then I grew tired of shooting backs and side shots. I wanted to get closer. To get the faces. To get the emotions. That required more guts. More so than the initial plunge into street. For each of us, it takes guts to challenge ourselves. To push ourselves to try new things and to grow as photographers. It takes guts not to be beat down by disappointment, rejection and frustration and to keep going.

For myself, I want to find ways to channel Capa’s bravery to go further with my photography. To get closer. To try new and challenging projects. Also, to try my hand at more photojournalism. Looking at the intensity of Capa’s work, as visually and emotionally powerful as it is, I cannot help but to be inspired. Now, I’m surely not saying one has to be a martyr for their art and die with a camera in their hand, but one has to think about being braver.

“If your pictures aren’t good enough, you aren’t close enough.”

That’s Capa’s legendary quote. But now it strikes me… it’s not just about getting closer. The bravery I’m talking about is about having the courage and guts to free our minds from what’s comfortable, safe and reliable. To challenge ourselves as artists, as creative spirits. Growth and change is how that spirit stays alive and vital. Each new challenge placed upon ourselves should bring another. And another. And another.