NOTE: This is a Guest Blog post written by Edward Conde for www.streethunters.net

I have been using an iPad since the first generation came out in 2010. I have always been drawn to PDAs, handheld computers and other computing gadgets. That same year I bought myself my first DSLR. As I started snapping away, I thought about what I would use to process my images. I had been using iPhoto on my MAC to store old photos. It did a good job with organizing my images. Then I tried Aperture. It was great for photo management, but for post processing I was lost with all the options and it  just didn’t feel very user friendly. I then looked for apps in the App Store to see what was available for iOS to process my photos. I found several applications that were interesting and decided to give the iPad a try as my mobile darkroom. I instantly got hooked processing my images on the device and the rest is history.

I had been asked on G+ what my workflow was for managing and processing my images on my iPad. It seemed to be a very popular subject for new owners of the iPad that were also photographers. I decided to document my workflow step by step. I had to create a workflow that fits the MOBILITY strength of the iPad.

At the core of the workflow consists these components:

This is the core of the workflow. This is all done on the iPad using a finger! This can be done anywhere at anytime. 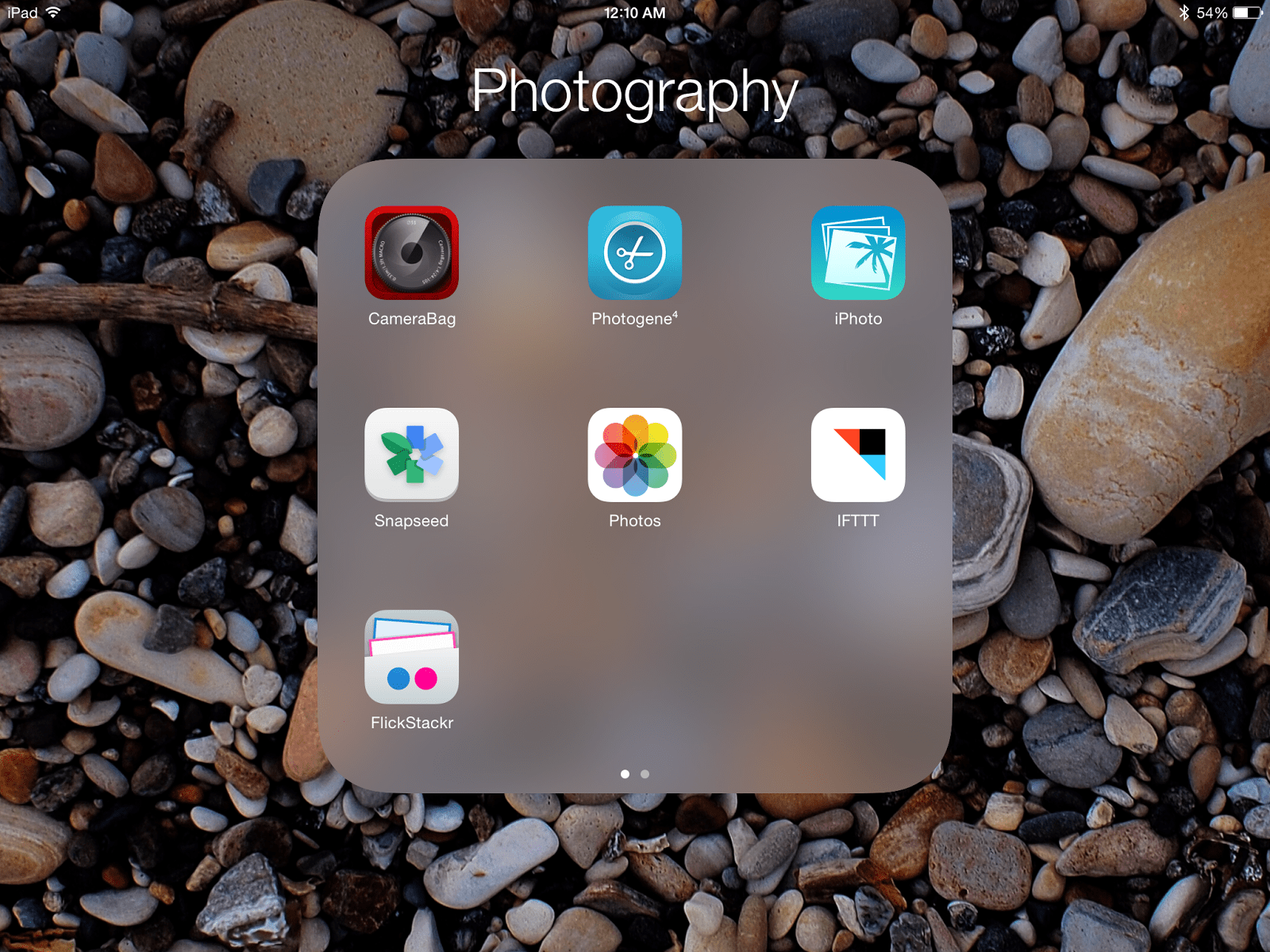 There are a handful of applications that I use for processing and manipulating my images. Each one has their own specific features that I really like and often use. Here are the apps I use and what I like about them. All of these apps can be found in the App Store.

Photos – This is the built-in Photo application for iOS. I create albums for every photo outing I do. I use descriptive album names so I know exactly what’s in the photo album.

CameraBag 2 – I call this one my Stylizer. This app has a ton color and black & white filter presets that are customizable. The best feature of this app is after you are done customizing a preset, you can save it to use it again and again.

Snapseed– I use this app when I need to apply some spot touch ups using the Selective Toolset. I use the Structure Tool to bring out a bit more detail in an image. The BW tool set for converting color images.

iPhoto for iOS – When it’s time to straighten an image, it doesn’t get better or easier than iPhoto. They have by far the best straightening tool available. It automatically checks if the image is straight. If it needs correction, it will display on the image in which direction you need to correct to straighten the image.

Photogene – By far this is one of the most advanced editors available for iOS. Has tons of features for processing an image. Photogene allows you to save custom presets, adjust image with the various different tools like Curves & Histogram to name a few. The feature I use the most, is to adding custom Metadata to the images. IPTC data can be added to an image in no time. I have created several IPTC sets that add metadata to my images before sharing.

FlickStackr – I use this app to share my images on Flickr. This app has an excellent feature of creating a setup defaults for new images that will be uploaded to Flickr. These settings can be adding images to specific albums and/or groups. Adding specific tags to images and setting the size of image you want to upload.

IFTTT – Is a web service that allows for automation of several different services on the internet. They recently created an iOS app and makes creating new automations really easy. This is the app I use to automate the sharing of my images from Flickr to other sites like Twitter, Tumblr & Facebook. I can customize each post for each social network. I can also customize what tags are used for each social network.

iCloud/Photostream – This built-in feature in iOS is the backbone of transferring my image from my iPad to my MacBook Pro at home. When I am connected to the internet, my iPad will automatically start backing up to iCloud, which in turn imports all the new images into my Aperture Library. This saves me time from having to import them myself. RAW files are supported, as long as you shoot only RAWs.

*Not all apps are used for each image. It really depends on the image and how I want to process it. Custom presets created in CameraBag2 & Photogene really help speed up the overall processing workflow.

How does this fit with Street Hunting?

On an average street hunt, I will go out for a few hours. I like to switch between different camera body & lens combinations to get different looks. During the street hunt I like to find a coffee house or dinner where I can take a short break, import and review the photos. This is where step one in my workflow starts. I import the photos using the Apple Camera Connection Kit. Once the photos are imported, they automatically go into the Last Import Album in the Photos App. I go through the photos several times, discarding the images that out of focus, washed out or the composition is wrong. Once I have selected the photos that I like, I will create a new album. I name the album based on the City + Camera & Lens used. This helps me identify which gear I used. Once they are moved to the new album, I will process one or two images to get an idea of the direction I want to go with that set.

I start with CameraBag 2.  I have about 10 custom presets that I have created, so I will usually go to them first and see if any of those will work well with the photo. The next step after CameraBag 2, is to open the image in iPhoto to check that the image is level, adjust exposure and color levels if needed. From here, I use a really cool feature in iOS called “Open In…”. What this feature does, it allows you to open the photo in another application without having to save the photo in the Camera Roll. Very similar to what Plug-ins are in Aperture or Lightroom.  I will run the photo through Snapseed if it needs pinpoint touch ups. If it does not, then I will open the photo in Photogene. Here is where I will apply a customized IPTC metadata and save the image at full resolution. I use Flickstackr to upload to Flickr. I select the photo I just processed, add tags , add it to my flickr albums and give it a title. Once I have uploaded the photo to Flickr, IFTTT will then share a link to the photo to my pre-defined social networks like Twitter & Tumblr. Once this step is done, I hit the streets for more street hunting opportunities.

So there you have it. A high level view of my workflow and an example on how it works. The iPad is a device that every photographer should own and carry. With the right photo apps to process, manage and share images, it is really great photographers tool. You can find out more about my iPad Photography workflow on my blog at http://digitalchemicals.blogspot.com. If you have questions, you can find me on G+ and drop me a line.