As the StreetHunters idea became a reality and took flight, the pressure increased. The pressure to deliver the goods. The challenge was on. I had to produce images and I had to write about my journey as a StreetHunter. This was, and still is, no easy feat. I had just dipped my toes into street photography’s waters and I was still definitely at the shallow end of the pool. Both Rob and Spyros had some experience. I had very, very little. It was exciting and intimidating, this challenge… but I welcomed it. I sweated and stressed over it, but I welcomed it. I was falling deeply in love with street photography and I wanted to become a great Street Hunter. I wanted to be a good photographer. Once I embraced the fact that being part of this project would give me the support, the encouragement and the push to develop my skills, it was, and has been, pedal-to-the-metal.

But, it hasn’t been a smooth ride. Like any creative endeavor, each success was followed by multiple failures. Personally, there’s been several moments of doubt. And the StreetHunters project hit rough patches as well. But anything good is worth fighting for and fight we did.

This was the primary objective. Without this, everything else would fall apart on my end. If I didn’t shoot, I couldn’t write about shooting. So shot I did. A lot. And there was failure. A huge amount of failure. And there’s still failure to this day. Not as much, but still a goodly amount.

I’ve documented the journey in blog posts here, one of the biggest obstacles was the fear. Street Photography requires a good bit of bravery. Guts. It was much different training the camera on a subject that could respond to me. A subject that could communicate with me. And a subject that could confront me. Honestly, bravery is something I still deal with on hunts to this day. Some days are more courageous than others. But what I’ve decided to do is let the mood dictate how I approach a hunt and how I’m going to shoot,.

However, the greatest benefit was the motivation. The motivation I had within was ratcheted up by Spyros and Rob. If not for their inspiration and helpful ways, there’s a chance I would’ve abandoned street. Their work was stellar and I firmly believe my trying to “keep up” helped keep the machine rolling. Being stuck with shooting on the weekend once or twice a month, frustration and failure came often. But my partners, my mentors kept the fire burning. And it still burns. The desire to be better and the wanting to “keep up” to my colleague’s standards.

Looking back through the images I’ve posted, I’m pleased with my growth. Pleased, but nowhere near satisfied. That’s a lot of work to be done and I still relish the challenge. Interestingly enough I discovered a funny gem in my trip backwards through my shots. The very first batch of street shots I took was at a Mother’s Day street fair in York, Pennsylvania. One of the shots I posted was of an obviously exhausted police officer. A year later, almost to the day, I snapped a picture of the same cop! At the same fair! I was totally oblivious of this until I reviewed the image. I really do live in a small town. And funny enough… this wasn’t the only circumstance. 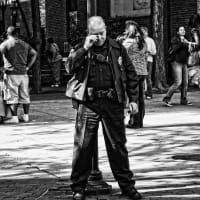 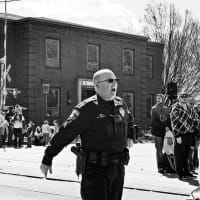 The idea of Street Hunters being a resource for street photography was a tall order. Sure, Spyros and Rob had the stellar images to present, but writing about it was a different matter. Putting “pen to paper” to be a resource isn’t as easy as it may seem. Spyros and Rob seemed to hit the ground running, but I had to take a different route. I had to write from a beginner’s point of view, because that’s exactly what I was!

But after the first few posts, I settled in. It’s been quite fun writing about this still new adventure. And also beneficial. To reflect on processes and execution has been helpful in my growth. And I can only hope that maybe my point of view would help other fledglings on their path. To be less intimidated and to embrace frustration and disappointment. Not to sound corny, but every great success is usually set up by multiple failures. Along with Spyros’ excellent guides and Street Hunt videos, our goal had been to cover the spectrum. From beginner to advanced. From an everyday person’s point of view. No stuffy, snooty pretentiousness. Just the real deal.

Sadly, Rob left the fold about half way through the year. Spyros and I were disappointed, but we had to move on. Before Rob’s departure we started recruiting associate Street Hunters. We wanted to provide more content. More pictures and more posts.

There were some great talents that gave it a go, but we lost them all. Every single one of them. It was understandable, really. The responsibility of being on a schedule… posting at certain times, certain days… it’s like a second part-time job. Especially for Spyros, who ran it all. And I mean ran it all. Designing streethunters.net, tirelessly maintaining it, and gladly formatting and publishing posts for less tech-savvy dolts like myself. They all went away.

Casper Macindoe was the shot in the rear the Street Hunters needed. Our maybe mite like a jolt from a cattle prod. His style, his wit, his tyrannical command of the English language… all very different from Spyros’ and mine. And his images. Just glorious. Bazooka loads packed with charges of both color and darkness. A very distinct deviation from our styles. Drawing  a heavy influence from art and his animation background, his work shook us up like a quake.  Casper quickly became a Street Hunter and this twisted version of the Three Musketeers was complete.

Fast forward a few months and Casper took charge of the Hangouts, a new and incredibly exciting feature. The general Hangout, The Pub, where members puff the community gather and exchange ideas, ask questions and consume adult beverages have been great fun.

Even more amazing had been the Hangouts with great street photographers killing it right now. Charlie Kirk. David Lykes Keenan. And, most recently, Khalik Allah. These Hangouts have been nothing short of amazing. To pick the brains of some of the stellar photographers today has been enlightening and inspiring to us and the readers. And we’re not done. No way.

Once www.streethunters.net and our G+ page started picking up some steam, it was decided that we needed more interaction with readers and fellow street photographers. We had received positive feedback, but something was missing. We wanted more. More back-and-fourth. And we got more. Lots more.

The StreetHunters.net Reader’s Community or as we like to call it now the SHRC was launched and it went from a simmer to full boil quite quickly. Not only was it a place for you to post your images, but the topics for discussion, comments, reader pics of the month, contests, shared links and great feel of camaraderie brought the pot to the point of boiling over. At 400-plus strong, the Reader’s Community has exceeded our hopes and expectations by many, many leaps and bounds. So much so, that I, personally cannot keep up with it. With those damn responsibilities of everyday life getting in the way, it’s hard to stay on top of what’s going on. But, at the same time, there’s a great sense of pride. I generally frown upon that deadly sin, but not in this case. I can safely bet that I speak for Casper and Spyros when I say that we cannot be more proud of the ego-free, encouraging environment that we and you, the readers, have nurtured in The Community. Mercy, you all rock!

But let me get back to the images posted in the community. It’s ridiculous! Not the amount of images, but the quality of the images. It’s just amazing. I’m constantly floored. And not only is it great eye candy, it’s also inspirational. I can go back to the trying to “keep up” bit right here. There’s so much goodness, that it makes me realize there’s really no slowing down. The images posted reaffirm there’s more work to be done. There’s better shots to make and take. With you all relentlessly dropping bombs of photographic awesomeness, they’d really no resting on any laurels. It’s go time, all the time. And I can also safely bet a lot of you feel the same. It’s not a feeling that it’s a competition. It’s a communal desire for us all to be great. And to have fun doing it.

And I personally cannot thank you enough.

So what’s next? For me, it’s to keep on this trek. To keep driving this thing that I do, that we do, ’til the wheels come off. This isn’t a race, it’s an adventure. And I’m going to enjoy it at every opportunity.

For StreetHunters, we have some tricks up our sleeves. Some things on the burners just starting to heat up. Things we hope will get you even more involved and generate a Casper-esque “groovy” state of stoked-ness. So I hope you all carry on with us and help us write the next chapters.

In the wise words of a bearded man from Crete…