Home Masters of Photography Under The Influence of John Gutmann

A student, at any age and at any stage, treads a well-worn path. I consider myself a student and I’m on a path. I research and study street photography greats for equal parts advancement in my own development as a photographer and for just pleasure. The path of research, as I’ve said before, is well-worn but with reason. The names link together, one great leading to the next, making the path easy to follow. The names Cartier-Bresson, Frank, Winogrand, Doisneau… they all are markers on the path. But sometimes, the path becomes too familiar. You see familiar sights. The same images pop up again on the mostly digital and sometimes hardbound trail I take. Then something, or in this case, someone different catches your eye and you must detour. Hours pass and you realize that the neck of the woods you’ve stumbled into isn’t that far off the path, it’s just been neglected. This particular neck of the woods I thrashed my way into belongs to John Gutmann.

Gutmann(1905-1998) was, in my humble opinion, a true pioneer in American street photography and his story is fascinating. Born in Germany, Gutmann studied art in Berlin with the great Expressionist painter, Otto Mueller. He then became an art teacher. As the Nazi regime rose to power he was prohibited from practicing art. Being Jewish, he was also forbidden from teaching, He devised a plan to escape Germany. The plan was brilliant… buy a camera. 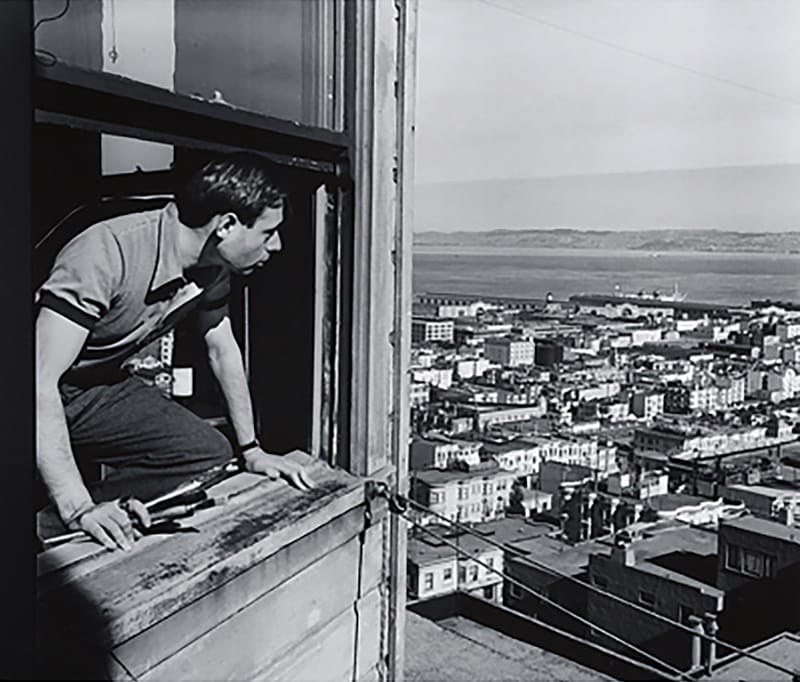 Gutmann purchased a Rolleiflex because it was advertised as easy to use. Being a visual artist, he thought he could master it, and he truly did. He shot only three rolls of film and presented his work to the Berlin office of Presse-Photo, seeking an agency to market his work. The agency did and he was off to his target city, San Francisco.

Gutmann reached San Francisco in 1933 and his photography adventure really began. He worked primarily as a photojournalist, but his images throughout the 1930’s were truly street photography. Twenty-odd years before Robert Frank, he toured America by bus and produced some of the most wonderful street images I’ve ever seen.

Gutmann’s early work provides an incredible depiction of Depression-era America. A beautiful display of hope, despair and of the outsiders. It also provides an outsider’s-eye view of the country. From San Francisco, to New Orleans, to Harlem, to Texas, Gutmann captured people, culture with fresh eyes. Unfortunately, Gutmann received little recognition for his work, never reaching the level of notoriety of other Depression-era greats like Walker Evans. He made his living as an art teacher until 1973. Later in life, he did receive some notoriety when he published a collected work, Culture Shock,  and a film was made about him, My Eyes Were Fresh.

Much like the title of the film about him, Gutmann’s work has provided me with fresh eyes. Please allow me to explain…

Gutmann, a Jewish emigrant, was very much the outsider when he reached America. As he toured the struggling country, his images reflected this. Coming from a very sophisticated Berlin to a loud, brash and yet diverse land had to be quite the culture shock. Gutmann embraced it wholly, even delighted in it. “The bad taste in this country was sometimes so bad that it was great,” he said. “I was seeing America with an outsider’s eyes—the automobiles, the speed, the freedom, the graffiti.” Gutmann shot spectacular images of very American things. A shoe-shine man in Harlem. People dancing in the streets of New Orleans Over-sized, gaudy advertisements. Automobiles. Graffiti. Massive character balloons on the streets of New York City. Very American, very ordinary. But Gutmann’s images of these things make them seem less ordinary and more amazing.

Too often, I’ve found my eyes have become stale in my hunting environments. This is especially true when I’m away from the larger, more vibrant cities for an extended period of time. The smaller cities here in Central Pennsylvania definitely lack the action that Philadelphia or Baltimore has. This promotes growth of the “staleness”. Familiarity breeds contempt. I’ve become lazy and even resentful towards these “same old” locations. But Gutmann’s fresh eyes, with their surrealist bent, makes me realize it doesn’t have to be stale. I can look at things differently, with different eyes. Approach familiar scenes at a different angle. Even look through someone else’s eyes. Put their eyes in my sockets, so to speak.

Nothing has to look the same way twice. Fresh eyes can facilitate this. It is easier said than done, though. Boiling it down, I’ll say fresh eyes can help celebrate  the very things we find mundane. All it may take is that different approach, that different point of view. Look at your everyday world as an outsider.

It is not lost on me that most of you reading this do not know of John Gutmann. Below are a few links to hit and view his incredible work. I highly recommend taking a few moments to do so. I believe you won’t be disappointed.

See you again on July 14th!