I have said before and I’m not sure why but beach images are always of interest. I think it might be the brazen openness of people, playing half undressed in the sun, both innocent and sophisticated at the same time.

If you’ve been watching Crit My Pic , you will have found I always enter an image after the initial moment through the composition and geometry of the image but for this one because of the emphasis already in play with thirds , thought it might be an idea of reading the image slightly differently. 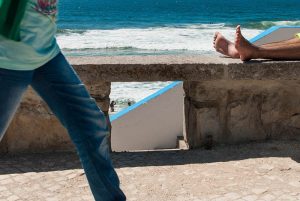 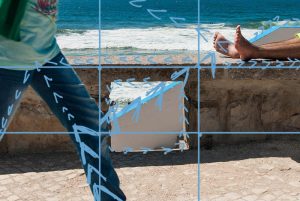 When confronted with an image, the eye immediately tries to find an entry point, where an element of the image crosses the outer edge and allows the reader in. Within this image it is the walkers forward leg, up until it meets the strong diagonal of the wall and then in my opinion flashes against the foot and the image is seen as a whole. 1,2,3, moves and the illusion of inclusion is broken, the eye has found a way out of the image, or more correctly has to find a new way in.Where I believe this particular image could gain strength from is holding onto the viewer a little longer. The eye likes satisfying mazes of composition, and although this image serves up delicious thirds, a hearty portion of fore,middle,background, and even a sweet dessert in the square porthole as dead centre as it needs to be there is no reason for the eye to bother as it’s found it’s way in and found its way out. Forcing the eye of the audience to travel across your image plane, and keep them there is the most troublesome aspect of photographic composition.

The elements composition is so brightly lit that each element has equal strength to the other which can make it difficult to read. Rather than the eye travelling around each of the elements it is led out of the image and has to start again.

When you are in the image the play between, no feet, his feet and their bodies does make for lightness in the image, and the colours harmonious.

Thanks for submitting Nuno, your image reminds me I should be aware of paths through an image.