Just barely over one year ago, I began my Street Hunters adventure. Needless to say, it has profoundly affected my life. It has turned into an obsession. It went from being an experiment to a full-blown addiction. Fourteen months ago, if a psychic would have told me I would be consumed by street photography, I would have laughed. If they would have told me I’d forsake hours of sleep poring over images, researching street photography’s masters out writing blog posts like this… I’d laugh harder. And if they would have told me I’d go crazy editing for the weekend, checking the weather forecast and basically praying for a few good hours to shoot… I’d be in tears.

But, it obviously would have all been true. Truth is, I’m thankful to be in the grasp of this thing that we do. I’ve pursued other creative endeavors before. I’ve been a journalist and a musician, and still enjoy making some noise now and again. And I followed my heart with each of those artistic notions. However, I didn’t see street photography coming. It wasn’t even on the radar. The reality is, I was pushed!

About three years ago, I started dabbling in photography. I shot trains, old rusty things, cats and dogs. I even did a little urban stuff. Not a serious hobby, but a once-in-a-while thing. Shared some snaps on Instagram and Facebook. That was it. Everything changed the day I strolled into, of all places, Best Buy.

I had been eyeballing the Sony NEX 5n camera for a while. I liked it’s quirky look, but I loved the feel and the image samples I had seen. The week after Christmas 2012, I stumbled upon an open-box clearance blowout NEX5n at Best Buy. It went home with me. The little beast really threw fuel on the fire for photography. I shot a lot after that. Same subjects, but a lot more frequently. Then I started hanging out in the Sony NEX communities on G+. It was there I crossed paths with my brother in arms, Spyros.

Spyros and I became fast friends and I loved his work. I thought the images he put out with his NEX6 were just great. I was especially intrigued with his street photography. Really, that was my first exposure to street. But my interest stopped there. I was busy exploring my new toy and shooting the same, familiar subjects.

Shortly thereafter, Spyros formed the HPC (Hard Photography Critique) Community and asked me to join. I was looking to improve my skills, so I said yes. There was incredible talent in that group, including some street shooters. Even though I was intimidated by their skill, the community was just what I hoped it would be.  Honest and informative. I learned a great deal and it improved my shooting.

Then Spyros began issuing challenges to the community. He’d pick a subject, then the members would all submit corresponding images. I remember the first was a self-portrait. I found it hard to turn the camera on myself, but I did and I had fun with it. Interestingly enough, I love doing this now… thanks Lee Friedlander! Then there were others challenges like motion-blur. But soon Spyros dropped the hammer… a street portrait!

Going up to a complete stranger, on the street, and ask them for a portrait? No way! I knew the street shooters in the community would be comfortable with this, but I definitely wasn’t!

But I talked myself into it. I didn’t want to chicken out. Being a fairly gregarious person, I convinced myself that I could use that trait to pull it off. I happened to be in Reading, Pennsylvania and there was a punk rock flea market. I was a punk once (still kind of am, I guess) and this seemed to be a perfect opportunity.

I couldn’t do it. I saw a few interesting-looking folks, but I couldn’t work up the stones to ask. The camera stayed slung around my neck, turned off and it’s memory card empty. It was as disgusted as I was. I shopped for a little, disappointed with myself, and decided to go home. On the way to my car, I spotted this lovely woman hanging out, having a smoke.

I approached her, camera in hand, cap off and powered up. At the time, it seemed like seemed like the hardest question I ever asked. Like the first time asking a girl on a date.

“Excuse me, can I take your picture?”

She smiled and laughed a little.

I squared myself and dialed her in.

I was blindsided. I had no response but, “uhhhhh.”

“I mean… it’s your picture, man,” she said acting like a pro who’s done this hundreds of times. Who knows, maybe she had?

“Just smile, “ I said laughing at my verbal clumsiness.

She did. I snapped. Three times. I thanked her, shook her hand and split thinking that I had just got away with something. Like I pulled off some great caper. 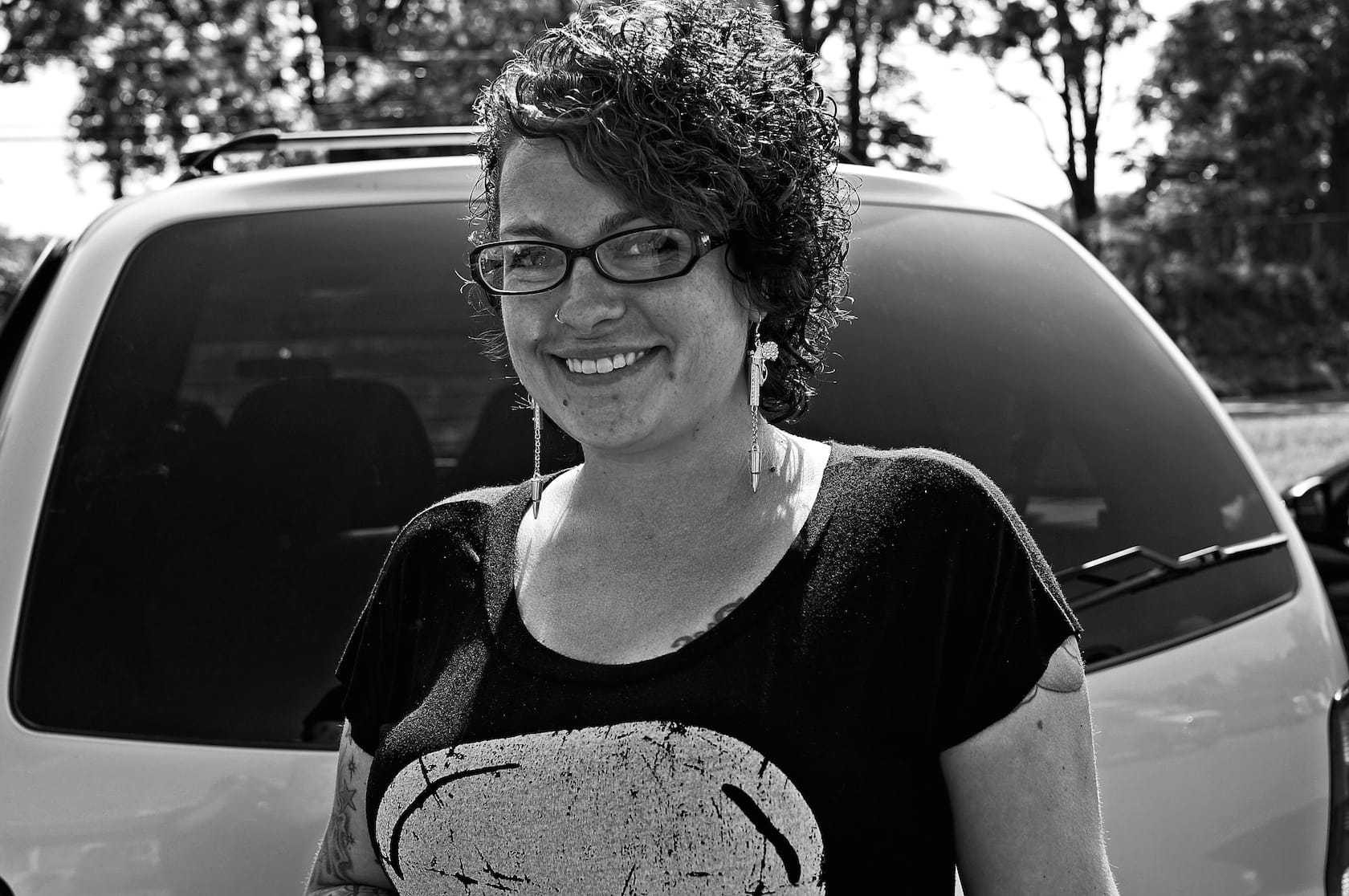 After that portrait, my street photography adventure ended. I went back to shooting the same old trusty, rusty and furry things. That was my comfort zone. Shooting that girl was terribly exciting and invigorating, but I looked at it as a one-and-done deal. The challenge was met and the thrill had worn off.

A month passed and Spyros approached me again with an invitation. He wanted to start a street photography website. I told him I thought the idea was cool and looked forward to checking it out.

He told me I could start. Right now.

Spyros said it would be cool to document my progress. To share that with everyone. That he and fellow street shooter, Rob Heron would help guide me. I could write about it, too.

Still I thought the idea was crazy. Just nuts. I told him I wasn’t that good of a photographer. I thanked him and declined.

He told me to think about it.

I had really enjoyed my street portrait exercise, I remembered. It was certainly much more exciting than what I was currently doing. I kicked it around some more, but still thought against it.

He continued to ask me and eventually I told him that I couldn’t do it because I thought I wasn’t that good.

“No man, you’ve got the eye” Spyros told me.

That stirred something. I thought that was a huge compliment coming from him, an established street photographer. I consulted friends and they told me to go for it.

Then I remembered the thrill of shooting that street portrait. The nervous, crazy energy from that most simple, most basic example of photographic courage.

I told Spyros I was in.