This image submitted by Rich McPeek has been sitting in the vaults of Crit My Pic for a few weeks now, which has given me more opportunity to give it a good looking over. The image is simply described as an old man, slightly separated from the masses, deep in thought. I like there are lots of uprights throughout the picture as this emphasises the elderly bend of the man in his coat.

I think the reason I always begin with the composition of an image is because it can define the story, highlight the main point. I come from an animation background and one of the simple but essential rules is ‘it (the scene) must read clearly’ and in fact I think for animation ‘it must read unequivocally’. In this image I believe the intent is to show the ‘Thinker’ and with the main character in this scene being elderly we hope and trust he has thoughts more romantic than our own. 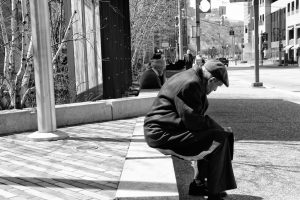 Lets see what we have on thirds. Within this image the strongest horizontal line comes from the screen left concrete wall and no matter how we look for thirds this thunking great object cuts the picture in half, in fact almost in quarters , but whichever way it dominates the horizontals. There are lots of verticals in this image and thusly each have their strength and none in particular dominate except for the heavily contrasted black wall to the screen left of the image above the wall. The intersection of these two dominant features would be a good place to think about third hot spots and could very well lead to balancing the image. What happens whilst you’re looking at an image with no thought to the subject matter is other aspects begin to lead, and/or follow. The image gradually becomes defined. I can assure you I have moved the crop tool around this image several times and I do return to the central character but the action of defining by composition forces you to really study the integral elements of a an image.

For this image I began to wonder what the chap would be thinking or more importantly what I want the viewer to think he’s thinking and because of the heavy composition of the screen left block and the screen centre seat the man is sitting on, I begin to get the feeling of the image contradicting the rule of thirds and settling dead centre. A dangerous composition unless you want to get one emotion across…stillness/peace/balance. Are these the thoughts of the old man, has he been able to reach a state of balance that us young guns with ideas and hopes and dreams can’t, does he tell us how it will be when we reach his age….so I tried this crop.

What happened was exactly as I described above and more. The man becomes the only point of interest in the image and the space , sorry the equal space, left around him become like a field of thoughts in which he and he alone can decipher but we are allowed to view.

When I have the focus of an image sorted it is only then I think of the other aspects, such as contrasts and because of the heaviness of the man’s coat I think the shadows can be pulled down but not to a level where they disturb the composition or lose the features of the sitter.

Thanks for submitting Richard, I find it personally really helpful to walk through another photographer’s images to strengthen my own!