Hi Marcel thanks for submitting to Crit My Pic with your image I’ve titled Red Commuters, although red angry faced commuter might be a better description. Instantly you’re drawn to the lady, who looks a little disgruntled in a way which reminds us all about the pleasures of public transport. 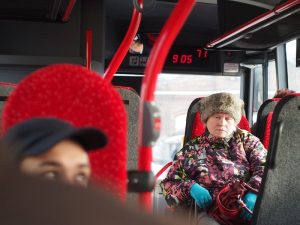 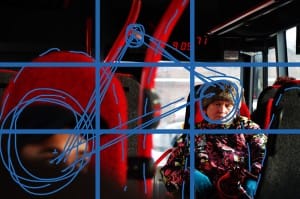 The three faces in the images , from the foreground to middle with her and the driver in the mirror really create a strong dimensional triangle giving real depth to the image. Is there a conflict between the first foreground face and the edge of the seat? I think there might be although I do love the way it adds to the very real proximity of the photographer within the image. The ceiling within the bus lands smartly o thirds although nothing on hot spots and the image just begins to fall down a little. I understand that discretion/invisibility are key to some street shots and in this one pertinent…no-one wants uncomfortable glances on a bus with no way out 🙂 In this case I feel it’s justified that your aren’t looking for the image by cropping but enhancing the strength of the one you proposed to get under irksome conditions.

Bringing together the reds from her bag and coat as well as the surrounding reds of the paintwork and clock give a homogeneity to the image, brings it together but as you can see I have dropped the blacks just for a little added punch which in turn begins to reveal the three points of triangular composition to the fore.

Because the lady is so prominent in the composition and the story of the image I would definitely crop her onto the thirds line and try as you might to slot her frowning eyes on the hotspot…this might lead to issues with the foreground guy, although I am sure there is a way around it.

It’s always slightly unfair to critique a picture out of it’s context and I am sure there is rich material ‘on the buses’ but maybe pretending you don’t know anything about your camera , you may be able to get closer and just push what you would like out of the composition.

Finally – that commuter is going to haunt me in my dreams!