This image immediately peaked my interest with my love of all things Martin Parr and Coney Island by Bruce Gilden.  The Beach is a treasure trove of the natural and the grotesque both in behaviour and characters. We have tattoos, trainers and what is called in the UK ‘Wife Beater’ – cans of Stella Artois, oh and look a warm bottle of white wine for the girls!

Although I do have a penchant for making something the focus of the image, there is in this image the grand idea of the beach snapshot, wide and unfocused, a broad comment on the culture….BUT thirds rule in my world and so it is where I always always begin. 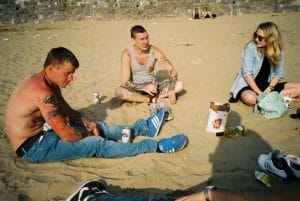 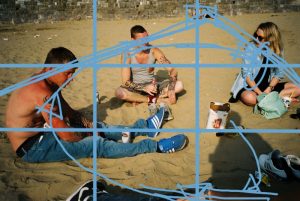 The image nicely gives us a beginning, middle and background as well as a far background of the two against the wall. The primary group including your shadow and the guys leg right at the fore of the piece allow my eyes to travel over the image in a c shape giving loads of interest and then the wall sitters create a really strong triangle from back to front again opening up the space in the image. We are forced to look at everyone and I think this is what the focus of the image is. Everyone, the entire scene, their interactions although with that in mind and even though we can imagine what is going on – boys and girls flirting – there isn’t quite enough actual evidence of it in their actions or poses…who is interested in who, what are the relationships, and in this image there isn’t quite enough information to apply closure to those questions.How could you get that without the gods being with you on a passing hip shot, I don’t know, so it would be my thinking that this would have to be part of a dedicated shoot, where you had time to cross back and forth on the beach, taking the chance that something always happens.

I love the proximity of the photographer in this, in close and unnoticed, although part and parcel of the image. You are there, forcing the viewer to be there with you smelling sun tan oil, booze, cliched chat up lines and giggling.

I also like that there is little or no post processing which again gives that feeling of snapshot.

My overriding thought on this image is I, as the viewer, am not left with a lasting impression, nothing I can take away with me to think on later and this is a key element on the way audiences interact with an image, even if the audience is only shooting for themselves. What I like a lot is the openness and ease of the image. By openness I do mean the great spacing between characters, and the ability given to you to wander about the image and be allowed to take everything in. I also really am enjoying the untouched colour, this to me really describes the scene ; it is what it is, it is what is happening and it is right now.

I hope this has given you a couple of pointers of what to look for when editing through a collection of images rather than what you can hope for when shooting from the hip. Thanks for submitting Stewart.