This lovely scene was dropped into the office by Ditch Mingo and a subject well worth spying through the viewfinder and admittedly a difficult image to improve upon, as any more time spent would have the girl looking either at the camera or being disturbed in some way but I feel there might be some post which could just help direct the audience more keenly to the subject. 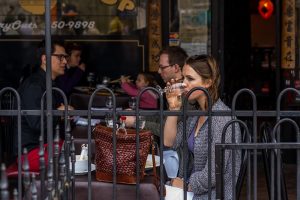 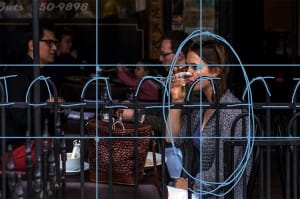 Unless on purpose, and I mean really on purpose, cutting the image in half with composition serves only to pacify any scene. Half way is the horizon line, looking out to sea as it were and suggests to the viewer that’s the kind of place to rest as they look at the image. In this case and with most, although it reflects the peace and platitudes of solo drinking fresh water in a cafe somewhere, in the main photographers are looking for a dynamism in the image plane. The difficulty in this image is not only does the fence have a strong bar holding it together but hoops which make the top of it just that bit higher…so after a little playing about I decided to use both features. The bar at half way to bring that idea of peacefulness and the hoops to bring it onto the thirds line. To aid that decision I had to take a look at my favourite of compositional points, the thirds hotspots.

What is important, what does make the image, what are we drawn to? In most cases it is the eyes, although in this image we are lucky enough to have a small cluster of activity around the eyes, the glass, the highlights on her cheeks and her almond distant eyes. I chose her eyes because while scanning the rest of the image the hotspots landed judiciously on the small childs chopsticks, her bag and her breast. These are all points of interest within the image as they tell us more about her and reveal a little about the place she’s in.

Although the tones throughout are delicious and soft, once again I ask ‘what is the core of the image?’ ‘What do I, as the photographer, want the audience to look at?’ ‘Can changing the tones, lighting, values across the board help that?’ I took the image curves down a little so the background would shift just a little further away and readjusted the reds saturation so the girl in the image wasn’t Los Angeles fake tanned.

Often enough, we get what we are given in street photography. My genuine feeling with this one is to have waited 3-7 seconds longer she would have seen you, she would have turned her head, and smiled and you Ditch would have for a fleeting 1/125th second, would have been in love.

Thanks for submitting Ditch, a joy to wander around your image.