As you might notice Henning I’ve changed the title of your image to Oslo Nine. This is because rather than it being taken in Oslo and was 9th in the series, on first glance, it felt like an underground bunker of some secret military base. Who knows what is going on?who knows who is who? And the POV , the so called ‘rats eye’ view really helps sell the story to me.

There is a really strong exit point in the image and your eye is immediately led down past the feet, across and past the pillars into the free air outside. The exit point is as near as dammit on thirds, as is the floor level, which all mark this out to be a classy image. I always ask though how could it be better.

I’ll deal with the irrational better first. She could be wearing heels and dropping a smoking cigarette. Chances of achieving that? Very little but it just gives you another insight as to how I see the image. 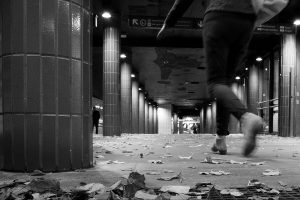 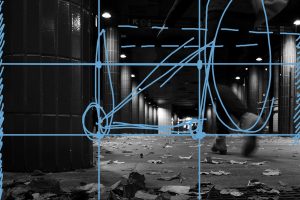 Just with a couple of touches I believe the strength of the photo can be enhanced.

To the left of the image on the near pillar there is a highlight and this just takes you out of the image. On the far right the column you see is complete. I don’t know whether this is good practice or just my own, but if I come across a situation where I have two similar elements at the edges I crop so they match. In this case the left hand pillar is ‘cut into’ and therefore so should the right hand one. I feel it gives the viewer only one way out of the image and that is the bright exit.

The second pillar on the left by the other character in the scene is just off thirds, by bringing the crop in to remove the highlight from the first pillar this might be resolved.

I like the characters are moving towards each other and they form a fair triangle of depth with the dark blob/third character by the exit. This could be a wider triangle but being the most moveable part of the image, always the most in need of patience.

My thoughts towards the end would be shifting your whole camera a few feet to your right, landing the exit, middle bottom third, ensure the closing of the sides with the columns and seeing as it’s a dry covered place, waited, waited, waited and then shot, shot, shot.

I hope you find at least some of the crit useful and thanks very much for submitting such a wonderful image.