Thanks for dropping this one in to Crit My Pic Edward, lets dive in and see what we have.

A busy street scene, in amongst modern architecture. There are some great colours and contrasting colours going on, some bright points and darks. So my first thought would be what aspect is the crux of the image story…is it the people or their environment? I ask this because it helps me focus editing. If it’s the ‘smallness’ of the population going about their same day business, then we need them ‘small’ but if it’s something like the similarity of people (which there seems to be a lot of in this image) then make that the focus. Currently I don’t feel there is a focus for your audience to hang on to. This can be fixed in the crop and brought about by, as I always mention, the thirds hotspots. I am trying to develop taking these in the viewfinder but because of the parallax between lens and viewfinder it is always off and I have to compensate with some cropping in post although more and more not using cropping to find the story. 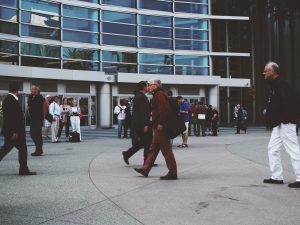 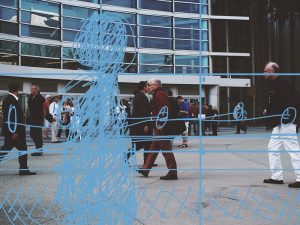 There are thirds and hotspots close to the mark, the top right hand corner hotspot is where the building changes from window to pillars and there is a pillar on the other side drawing itself down a thirds line. The people in the back and foreground are grouped into almost thirds. There is also a nice feeling of depth hingeing around the guy in red at the centre, so just by looking through the ‘rules’ it reveals the guy in red as primary focus.

Now you have some beautiful colours going on and yet with post processing you felt it would best tell the story by lowering the contrast. My thoughts would be clean, crisp like the environment.

After a while of thinking I began to feel there was something missing. And I feel it’s a near ground person or object. Another shard of colour or a person’s torso passing into the scene, even through a fence and I suggest this because even the guy in the middle of the frame feels like he is in the middle ground of the shot and the other people and building collectively as the background. It makes for a more interesting image if all three ‘grounds’ are touched through an image of this busy type.

I find ‘emotion’ within an image a constant source of trouble, people in my hometown aren’t prone to public displays of emotion BUT it can make an image so readily that it must always be pursued (ish maybe – I don’t like to pursue anything…bad knees :))

These are just some ideas as to how to deliver with a bit more punch.

Thanks again for dropping the image in, I hope ideas are useful and you ‘stay sharp and keep shooting!’