Art is not immune to change. Artists, and the tools that they use, reap the benefits of advances made in technology. Creators, if they allow themselves, can experiment, push mediums or even break new ground with greater ease if they choose to embrace change. Doors and eyes can be opened for the first time, or just opened wider. Photography is a shining example of this. To think how far photography has come in the past two decades is absolutely mind-blowing. Technological growth has affected everything we know, and to degrees that we often shrug off advancements as common, or expected. As photographers in the now, we take change in stride. We embrace the legacy of the greats whose work has inspired us and compelled us to create, but we use the evolving technology to get us to our creative endpoint. Street Photography is not approaching a new age, it’s in the heart of it. The genre is being directly affected by the science we often take for granted. It’s changing the game. Some say for the worse, but I believe for the better. Allow me to present some reasons why we are in a New Age of street photography.

Digital has opened the door for aspiring photographers. There is no need to have film developed by yourself or another. The images are on spacious storage media that doesn’t require any hands-on work from the shooter or the developer. This fact alone has made photography more accessible to one who may have been intimidated by the idea of shooting film, and the work involved. I include myself as one.

Also, the cost of digital equipment has become more reasonable. It is within the grasp of the everyman. From small camera shops to big-box retailers, quality gear can be bought and at a reasonable price. Again, this is another gateway that I have walked through. The Sony NEX line, which I’ve embraced, produces amazing images when used at even a low spot on it’s potential. The lower end models of this line won’t break the bank, and the same can be said for all the other manufacturers.

So, on a personal level, digital photography has paved a path for me to street photography. Safe to say, I cannot be alone. Affordable, quality equipment is anybody’s launching point into photography. You must have the equipment to make the images. Digital photography has also made shooting more attractive by simplifying things. Every digital camera has an Auto mode where a shooter basically doesn’t have to worry about anything except composing. From compacts to higher-end DSLRs, the Auto mode is there. This is another attractive point for the photographic rookie.

All of the above also ties into an all-encompassing necessity in our modern lives: convenience. Time is arguably our most valuable commodity these days and digital cameras certainly provide time saving benefits to the street photographer. Amateur or professional can take full advantage of the convenience offered by digital cameras.

Bottom line: digital cameras have brought more people into photography. Some of those people have taken the plunge into street photography. 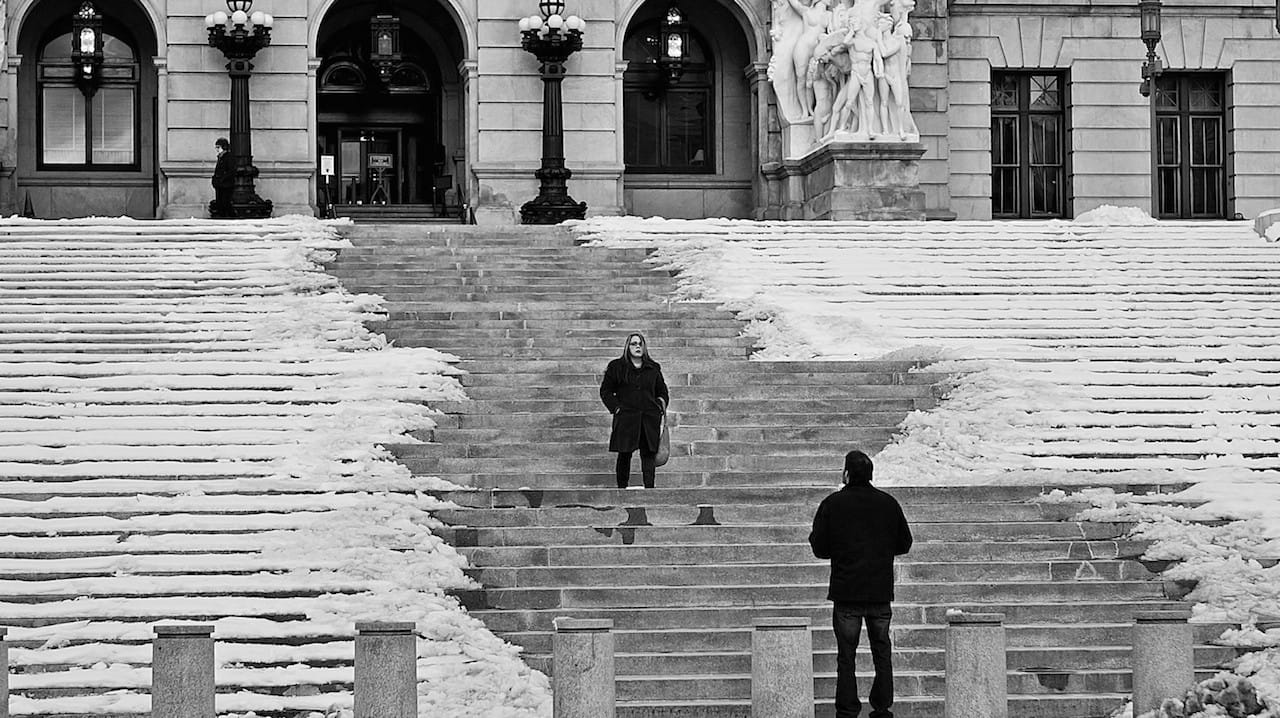 Social media platforms where we share our work have become our art galleries. No longer is the street photographer confined to  the third dimension’s walls for hanging their work for all to see. Facebook, Google+, Twitter, Tumblr, Flickr, etc… have become our galleries in the ether. Prints don’t have to be made for eager eyes to gobble up. Street photographers, their fans and contemporaries, can view images anywhere at any time.

And social media has created a thriving environment to give and receive criticism, which can help fledgling and seasoned photographers. You Tube has been a source of instructional videos for the aspiring street shooter. Jon Free is a great example how social media can be used to further the genre, guiding eager eyes on hire to sharpen their skills. Now it’s obvious that books or mentors are not necessary to educate one’s self about the craft. Ebooks are also gaining ground here as well, with authors like Thomas Leuthard are making noise and showing shooters the way.

Smartphones are also doing their fair share to push street photography further into it’s new age. In conjunction with social media, the smartphone makes anyone a candidate to become a street photographer. It’s always on us and always at the ready. No lenses to attach, no film to load, no files to download to our computers. While some purists may dismiss street work shot with a smartphone as not being “true” street photography, we must accept the fact that a good street shot is still a good street shot… no matter what device it’s shot with. The iPhone’s amazing camera is a good example here. There’s many feeds on Instagram that feature work done only with the iPhone. Hannibal Renberg(IG @leoleoparis) has nearly 20,000 followers of his street feed shot exclusively with the iPhone.

The smartphone also offers instant sharing to the social networks, giving the shooter the instant gratification that a lot of the world adores. Again, convenience rears it’s head!

Editing is done on the device as well, with an abundance of apps available. A mediocre shot can be rendered post-worthy with a few swipes of the screen. Yet again, convenience is king and helps to generate more street work. Sure some of it’s not that good, but the ease of use of the smartphone and editing apps help to further one’s interest in street photography. The popularity grows.

What I find incredibly exciting about the smartphone and it’s role in street photography’s advancement is how it can be used with digital cameras. Today, some smartphones can be used as remote shutters and viewfinders. I find this very, very cool and intriguing. I, myself, am anxious to use my smartphone for this. The idea of being able to get new points of view is very intriguing. I can see technology like this pushing street photography further.

Clearly it’s no fluke that camera phone sales are outpacing digital camera sales. They are here, and they’re here to stay. 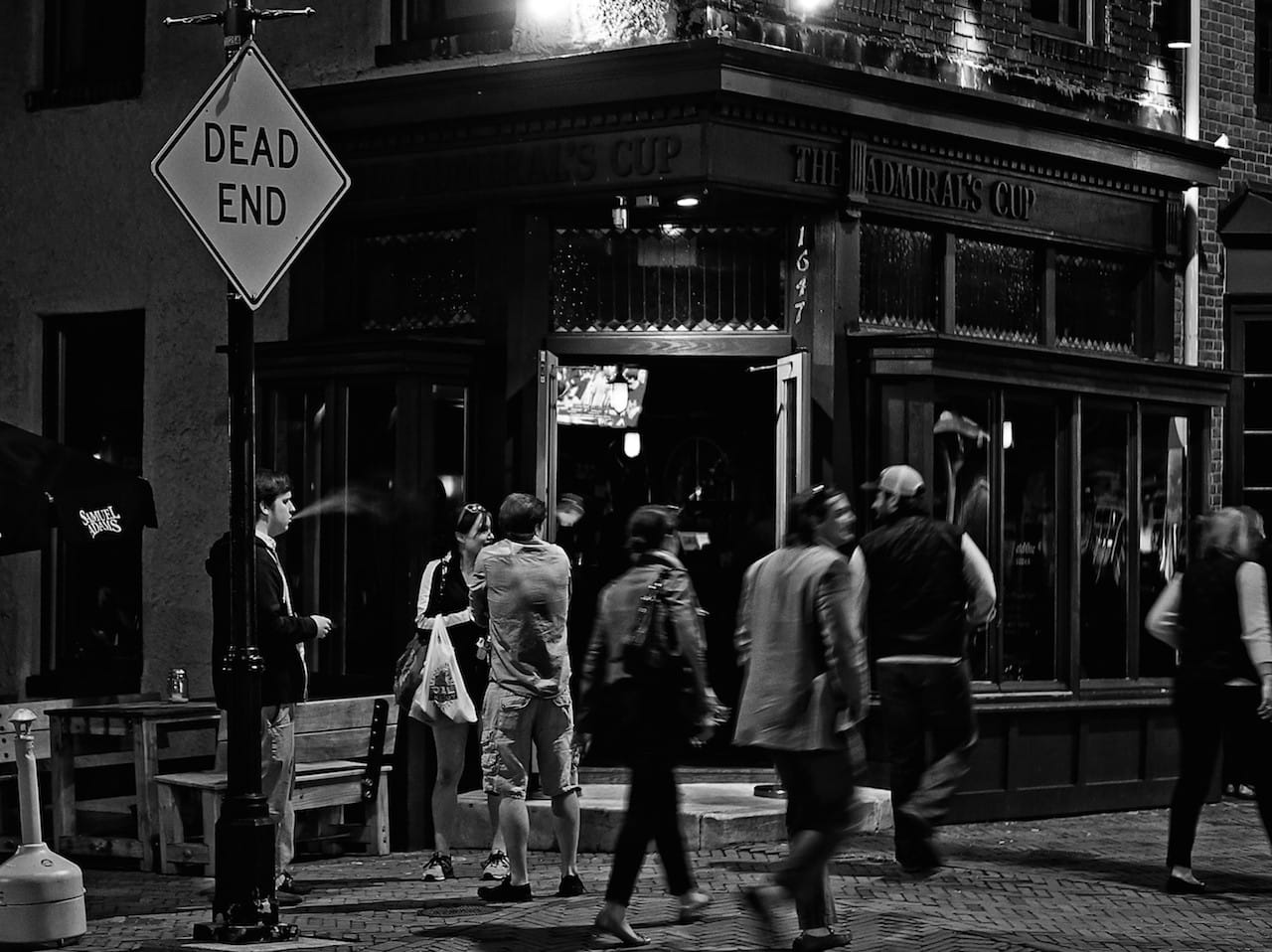 Digital post-processing has made the act of photo editing accessible and economical to the masses, now running in stride with the digital photography. Not only are there amazing, yet affordable, programs like Lightroom, but the there’s free options as well… albeit not as robust. Photo editing had become increasingly easier to do, making it less intimidating to the photographer. A decent shot can be made into a pretty fantastic one with just a few clicks. Users can apply filters and make their images more appealing in seconds. To the street photographer, convenience comes into play again. Less work editing means more time shooting. More time to produce images and more time to post and share them. More time to sharpen their skills and experiment with new techniques. All these things factor into pushing street photography deeper into this new era. It’s a progression. Photographers produce more images. The images are shared on social media, and more and more street photography websites and communities spring up. In turn, more people are exposed and turned onto street photography. And, some of these people are inspired to create on their own, and the train rolls on.

So how long will this new era of street photography last? At this moment, I cannot see an end in sight. Perhaps this is not a new era at all, but the new standard. But how much more will street photography grow, or is it peaking? Will it eventually burn out like fads in music and other arts? I say no, it will not. While I’m definitely biased, I think street photography is far too compelling a genre to just fade away. I do believe we are at a high point, with street at arguably it’s most popular, but street will transcend changes in taste and popular favor.

Street Photography feeds off a never-ending stream of visual stimulus. As long as we exist, there is inspiration and content. The technological advances we have made have made the genre available and accessible to almost anyone. We respect the old ways while embracing the new. We pay homage to film with our digital processing that duplicates the look and soul of film developing, but we enjoy the convenience of doing it on a laptop or a tablet. When you think about it, it’s respect we are paying to the form. It is a nod to the masters and the ground they broke. The fact that this new age of street photography, at it’s core, is as much about honoring tradition as it is in advancing it, is testimony to how great street photography is.