This week’s image has been submitted by Anton Fortein. It shows us a chap walking his dog coming out of a covered area into the bright light. Everything feels old, the buildings, the person, the dog, the strange cupboard on the right of the image, it feels, because of the building in the background, somehow New York. I chose this image because there is so little awry with it ,I was interested to find ways of taking what is already a great photo and pushing it to the next level. 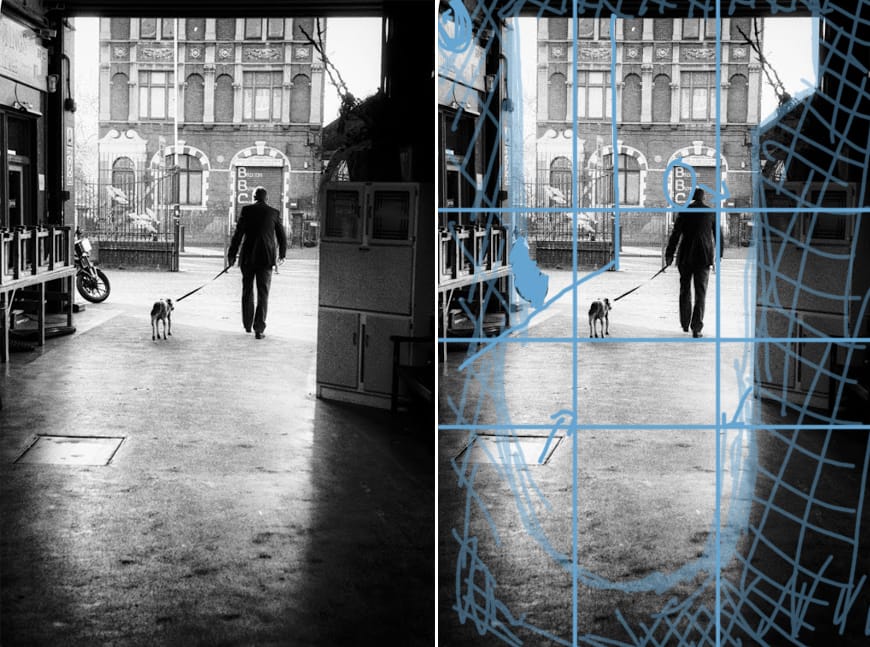 Firstly the image is in portrait, some may say (HCSP for instance) that street photography cannot be shot in portrait, although I disagree as choosing either mode can lend a hand in telling the story contained within the image. The choice of portrait forces the viewer to think about the personality in the image. The chap and his dog are walking way, we can’t see the personality, so we are the forced to enlighten ourselves by using the periphery objects, the landscape. So in this instance I believe that to have waited for a front facing pedestrian or shoot in landscape would have been a stronger choice.

The thirds are being used here although nothing on the hot spots. Personally I don’t mind there being nothing on hotspots if the points of interest are all off kilter equally, which they are in this image. The central third box has the dog and the legs of the walker in, the dog and the legs almost on a half way line, cutting the image in half which I feel reduces the amount of dynamism in the image.

The only bit that does stick out as not needed for the image is the motorbike and I’m thinking that maybe you could have done with taking a step or two to the right which would have excluded it.

My knowledge of printing is based on a couple of tries some 20 years ago and thing such as dodging and burning, never. Up in the top left corner there is a shard of light reflection of something and I feel could have been removed.

The entire image is vignetted with shadow leading to the bleached old building in the background which works nicely although pushing the darks down and the lights up may have added to the ‘gateway’ from light to dark.The top half of this shadow is created by hard lines and the lower by a soft curve across the floor and once again this splits the image in half.

I love the BBC scrawl on the building, it’s anarchic for some reason, and places the image in the UK and no matter how they try the golden age of the BBC was in the 60’s with proper accents and trustworthy resources, a time where the gentleman in the image could have come from.

Overall this is a great image,simple,nostalgic and with a deal of clarity in the story, although my feeling is with just a little more time and/or frames taken inside the setting there would/is more chance of seeing a phenomenal image.

Thanks for submitting Anton. For me it was very useful to have to try and understand from a film user point of view as well as in terms of contrast and shape. So in short my thoughts are:

As I’ve said before in Crit My Pic, I really appreciate Street Hunter readers for submitting their photos and I hope the thoughts I have are helpful within your practice.