Let’s have a little fun, shall we? With this post, I’d like to share with you my 7 personal good habits I practice when shooting on the street. These aren’t carved in stone, by any means and they’re definitely subject to change. But, I’ve found these to be the most popular ones I employ and usually the most helpful. So, let’s dive in…

This is simple, but necessary. By being prepared, I mean be ready for any situation that might arise when out on a street hunt. First, I ALWAYS make sure I have an extra battery and that it’s fully charged like the one in the camera. The NEX-6 I use isn’t horrible as far as battery life, but when I’m out, it’s always on. Plus, I have the LCD cranked to its brightest for when I’m shooting from the hip, which I’ve been forced to do a lot of lately. That is a real juice-sucker! I’ve even purchased another battery just to be safe.

Also, you must be ready for the elements. Proper attire and an umbrella are things to have handy.

A different focal length lens is another thing to consider. Different shots may demand another lens. I like to stick to one focal length when hunting, but there’s times where I’ve regretted not having another lens with me. Specifically, a wider-angled one. I usually shoot with the 35 or the 50mm lenses, but I keep the svelte 16-50 powerzoom tucked in my little bag just in case.

I’m not one to ambush people, or jump in their face. That’s just not my style. Even though I really enjoy someone like Bruce Gilden’s work, I don’t think I could ever operate like that. I know I’d be stunned and likely put off if someone did that to me, so I don’t employ that tactic. Sort of adhering to the golden rule, I reckon. That and I don’t think it’s have the stones to do it!

There’s a personal space, “no-fly zone” I respect. I figure this to be space of somewhere around 3 feet of a subject. That, in my book is still pretty close. Usually I work at a distance of 5 feet or greater. I find that distance most comfortable for me, and best for the sake of composition. This amount of distance also serves as a nice buffer when you have to salve a confrontation of any kind with the subject. It gives you the opportunity to smile and ease the subject’s mind, with them seeing your face. Also, in the absolute worst case, the space could give you the extra step if you need to bug out of there!

Absolutely necessary. I’ve mentioned this in previous posts, but it’s worth mentioning again. As I eluded to in the last point, the smile is the best defense in a potentially sticky situation. I’ve found that 99.9% of the time, a smile works if a subject questions me or even just gives me a dirty look. Okay, that’s not a true percentage, but it’s pretty damn close!

Since I’ve began working more closely, focusing on portraits and expressions, I’ve received an increasing number of “dirty” or quizzical looks. “Hey, I’m really a nice guy…”. I can’t blurt this out, but it’s the truth. A smile does that for me and will probably do it for you, too. Again, with a smile, most of the time I don’t have to explain what I’m doing. The smile does it for me. Plus, it’s just plain nice,  and I like being nice. 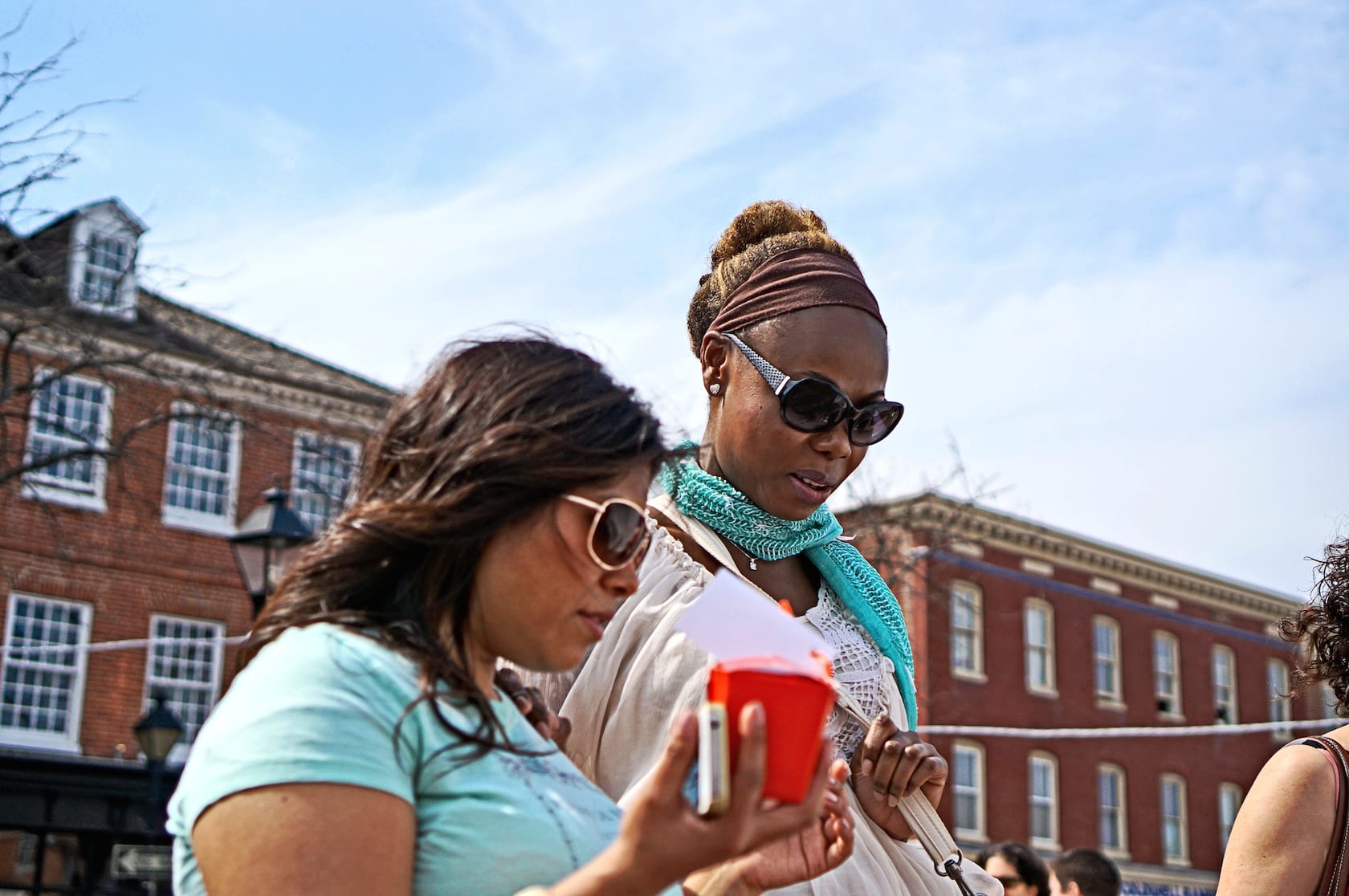 I love shooting “surveillance-style”. It’s cool to shoot invisibly, operating in the shadows or blending in with the crowd. It’s sneaky, you feel like a spy and, it’s a rush. I dig all of that stuff. It’s fun. But, I’m a social creature too! I’ve found that working surveillance-style, albeit thrilling in it’s own way, is a lonely activity. So, being the social monster I am, I make an effort to mix up the surveillance with engagement.

On my extended street hunts (instances where I’ll be out for over an hour), I like to break the ice with asking for a posed street portrait early in the game. This serves me well for setting the tone. It loosens me up and relaxes me for future interaction with subjects. Also, it gets me dialed in for shooting later portraits.

Besides the posed street portrait, I like engaging in a little “small talk” with potential subjects or just about anyone on the street. I find this easy to initiate with a simple, harmless compliment. “Hey man, nice hat…” and then talk about the sports team he’s representing. That will usually get any male yapping. Women, can be a little trickier to manage when complimenting. There’s enough bad men around that my harmless compliment could be misconstrued as lecherous. There’s no real concrete advice I can give when engaging a woman. It’s a judgement call and one that’s difficult to make. Use your head and tread carefully.

Engagement, conversations, besides being social vitamins and making street photography more enjoyable also may give you a chance to find out something about the turf you didn’t know. It may turn you on to another part of town. It may clue you into something you didn’t know what was going on. Who knows, it could lead to some awesome shots!

Going along with engagement, stopping at a local pub, coffee shop or restaurant it’s always on my to-do list when on a hunt. You give a little back to the community in which you’re shooting and it could give you some “inside” information like I mentioned in the last point. Someone might ask you why you have a camera and give you a tip. A longshot, for sure, but it can’t hurt.

Also, on the really sneaky side, it could give you a glimpse at a potential subject. Now I would never “tail” or stalk someone leaving an establishment, bit I will make a mental note. “Look out for the red hat”, or “watch for the red heels”.

Early on, I NEVER sat or looked down when on a Street Hunt. My focus was always straight ahead, eye level. I didn’t realize there was a whole new world of compositions available to me just by sitting down, shooting from the hip our getting even lower. I blame this on sensory overload and intimidation when I first began hunting. Now, I make a conscious effort to take a seat on a bench, curb, or whatever…even get down on the ground! I say conscious effort because the pull to keep moving is great. Getting low pairs nicely with another good habit I’ve been implementing… patience.

Again, this is a practice I’ve mentioned in previous posts, but it’s arguably the most important when faced with a small window of opportunity in which to shoot. If you’re like me, and limited to shooting for a few hours on the weekend, you want to find “target rich environments”! This holds especially true when you live in or near a small city, not a huge and constantly pulsating metropolis.

Because I live near less bustling burgs, I practice the habit of checking the event calendars for the cities. I check these online and implement what I like to call “value oriented shooting”. Or, if you want to have it sound even less sexy… “the most band for your buck”.

Since I don’t have much time time to roam, I wasn’t to find as many targets congregated within a fairly small perimeter. Great examples of this are fairs, carnivals, outdoor concerts, demonstrations, markets or any number of events where the masses gather.

Not only are the examples above like shooting fish in a barrel, they also tend to provide a colorful cross-section of your local communities. They can serve up a glorious buffet of diversity, of varying races, ages, cultures and classes. Now spectacles like these might not “truly” represent “everyday” life and routines on the street, but for the budget-minded snapper (with time being the commodity that’s valued), they are a Street Hunter’s paradise. Checking the calendar, via your local newspaper’s or community’s websites, is a habit I gleefully indulge.

So there you have it, my “lucky seven” of good habits that I practice with street photography. I’d love to hear about yours! Cheers!