Street Photo of the week by Fred Hertzog

With a number of Masters across the internet we thought we would feature a lesser know/recognised Master ; Fred Hertzog from Stuttgart, Germany but most widely known primarily for his photos of life in Vancouver, Canada. He focuses on the working classes mainly and at a time when many were using black and white he used colour slide film. For us at least the glorious use of muted colour whilst documenting unposed street life just at the turn of mass marketing,media and change of identity on our streets gives his individual eye. He is able to imbue his images with a serenity and innocence without losing a sense of individuality  of the characters within his scenes. 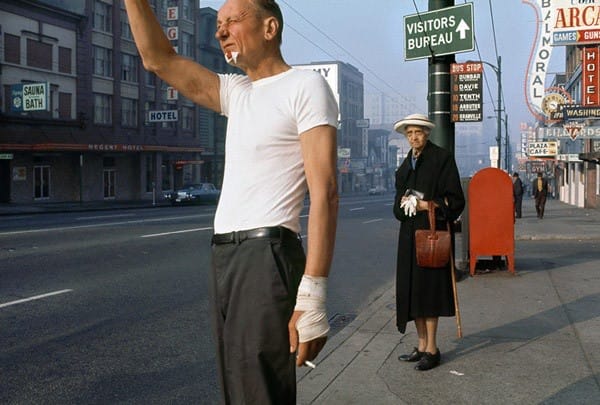 We chose this particular shot as it firstly shows off Hertzog’s use of colour and the subtle composition . Although the title suggests it’s all about the man with the bandage, the elderly lady in the middle ground really does steal the show. They must be waiting for a bus, as he waves and she stares intently just over his shoulder. The tall guy in the foreground , the old lady and the red bin in a sweep to the background intimates what is going to happen in the next few seconds as the bus sweeps in and parks up. Hands seem important, the one in a bandage of course, the one out of shot and the ladies white gloves create a really strong triangle of compositional association giving the shot depth. The colour from the slide film is so subtle as if there is a mist on the ground or the shot has been taken in the early morning – are these really commuters? We love the nostalgia in the picture although nothing really has changed. Street signs we have in the modern age, bins,men in t-shirts and slacks, smoking (although that might disappear soon), the only clue to the age is the lady’s gloves…ladies don’t do that no more – except in films and eventually we get to the core of Hertzog’s shots… all, almost without exception look as if they have been stolen from a movie.

Although known, Hertzog falls under the shadow of photographers like William Eggleston and Stephen Shore and even though they are greats we think Hertzog is very much worth a study.

It appears the Equinox Gallery, Vancouver are the only people which exhibit over 50 years worth of Hertzog work.