If you’ve read any of my posts before, you’ll remember how I’ve said sorting street photography is a real challenge for me. Two things factor into the challenge: time and location. As far as time goes, I work a odd night shift. When I finish work, there is literally nothing going on nearby. So, shooting on the weekdays is frustrating and pointless. This leaves the weekends. Weekends are a battleground! Chores, family, friends and relaxation all compete for my valuable time. Believe me, I want to do it all, but sometimes it’s not possible. Deep down I want to shoot, shoot, shoot. So, I do what I can and usually end up with just a few hours each month to go out and do it! This leads us to the second challenge: location!

I live in Central Pennsylvania. It’s an area mostly known for industry and agriculture. There’s three smaller cities all within 30-40 minutes of me: York, Harrisburg and Lancaster. Pennsylvania’s two largest cities, Philadelphia and Pittsburgh, are two and three hours away, respectively. Not exactly convenient if you’re pressed for time. These two big metropolises are gold mines for street hunting. Someday soon I will spend a day in each, just doing that. But for now, I’m stuck with my local three cities and one “wild card” I’ll get to later. Let’s start with my hometown, York.

York is the fourteenth largest city in Pennsylvania, boasting a population just shy of 44,000. It’s a city that has a rich history, especially during the period of America’s Civil War. There are many beautiful old buildings mixed in with new architecture and the downtown is quite lovely. However, it is a tough place to shoot as far as street photography is concerned. Given the time period when I can shoot, there really isn’t much going on downtown. On Saturdays there’s some opportunity near the Central Market (it resembles a farmer’s market), but little else. Opportunities present themselves here and there, but it requires a great deal of patience and quite the commitment of time. There’s very little “foot traffic” because there’s not a wide variety of shops or restaurants downtown. After dark, there are a few popular bars, but York can be quite dangerous. It’s ranked at number 18 on the list of 100 most dangerous cities in the US. However, I haven’t abandoned my home town altogether. York does have a few outdoor festivals and street fairs that offer a good many photo opportunities. In fact, it was the Mother’s Day festival this year when I first dipped my toes into the street photography waters! 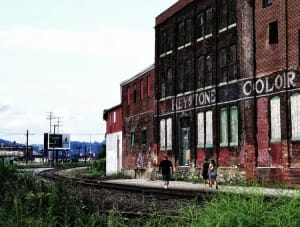 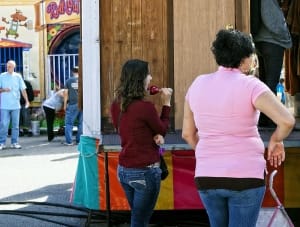 Lancaster, Pennsylvania is the state’s eighth largest city with a population of 59,000 plus. It’s approximately a 30 minute drive east from York and I work there, so it’s a no-brainer for a location. Like York, it has some fantastic older architecture. Also, it’s a little more “hip” than York, with some fantastic eclectic little shops and a numerous assortment of eateries specializing in various cuisines. That being said, there is more foot traffic when I’m able to shoot. The weekend streets are more vibrant than York’s, but they’re not exactly teeming with activity like a larger city. Lancaster is very interesting, though. The city is on the edge of Amish country, so it offers up a wide variety of subjects to shoot. From urban lifestyles, to the “plain” folk, the Central Market on Saturdays can be a target rich environment for the street hunter! One thing of note, though. The Amish don’t like to have their faces photographed. This is related to their religious beliefs and I am respectful of that. It’s said that some will allow you to photograph them when asked, but I haven’t worked up the courage to do that yet. 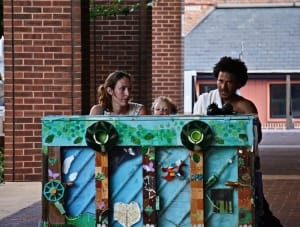 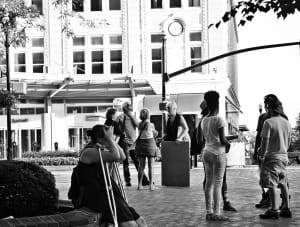 Harrisburg is Pennsylvania’s state capitol and is also only about a 30 minute drive North from York. It’s my favorite place to shoot of the three Pennsylvania cities close to me. Being the state capitol, with most of the government offices located in a cluster of grand old buildings at the capitol complex, you can imagine how the streets are bustling during the weekdays. Unfortunately, I can’t tap into that well of opportunity. But the weekends can be very productive for the street hunter. Harrisburg looks and feels more like a big city than York or Lancaster, and it’s located in the banks of the Susquehanna River. It has larger buildings, more traffic, more recreational opportunities and a generally more urban feel. Fantastic backgrounds can be found all over the place. From the aforementioned classic, grand government buildings and turn of the century old city buildings, to the long alleyways and popular city street intersections, Harrisburg gives me the traditional street photography backdrops that are found in much larger cities. The weekend gold mines tend to be Front Street/Riverfront Park and City Island which are located along and in the Susquehanna, respectively. With decent weather, these areas are hot spots for locals out for a stroll, exercising, dog walking or participating in the many events that are scheduled from spring through fall. These areas are quite lovely, too, with tree-lined streets and footpaths. City Island is particularly great in the spring and summer, with it’s recreational activities. It’s hard not to come home with at least a few good shots. Also like bigger cities, it provides more “characters” to hunt. 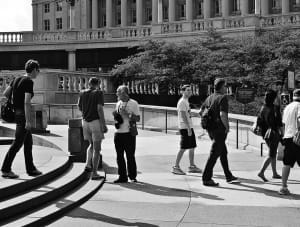 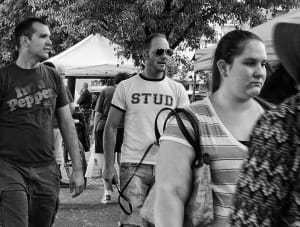 Baltimore, Maryland is the closest major metropolitan city to me and it has a big spot in my heart. I can be on the street in Baltimore in about an hour, and that includes some time searching for parking. Baltimore is directly south from York and not far across the state line. I’ve only hunted there twice, and I cannot wait to do it again. It’s a huge American city, it has a magnificent harbor on the Chesapeake Bay, and it has a distinct “flavor” all it’s own. You may have seen Baltimore featured in great television shows like Homicide: Life On The Street or The Wire, along with numerous other tv shows and movies. Now, I can only speak about the two places in the city where I’ve shot: Inner Harbor and Fells Point. The Harbor is constantly buzzing with action on the weekends. Shops, restaurants, museums, the National Aquarium, rental paddle boats, and other attractions all line the harbor’s interior. Besides the locals, there’s tourists, police, and street entertainers. So, so many opportunities and a beautiful background to snap them against. Fells Point is a more rustic and charming spot along the water with it’s cobblestone streets and amazing multitude of pubs, taverns and bars. It’s smaller than the main section of Inner Harbor, but it has a lot of character and is home to a lot of characters. But, this is only touching on a small bit of Baltimore. The downtown is vast, and packed with tall buildings, old and new. The city has a great amount of distinct neighborhoods. I absolutely cannot wait to explore the many, many options “Charm City” has for my trusty NEX! 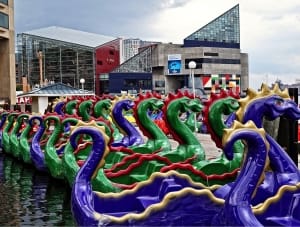 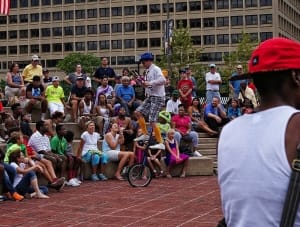 After reading this, it’s easy to tell that Baltimore is the top spot for street photography near me. I try to get there often, but it is hard. Committing two hours to travel when you only have a small timeframe on which to shoot is hard. But, it’s comforting to know it’s not that far, and when the opportunity is there, I can take it. Philadelphia is also a huge metropolis. “Philly” is a two hour drive from where I am, and I’m chomping at the bit to go shooting there! Reality is, you have to make the most of what’s available to you and what fits your schedule. I choose my battles on the weekends! I check schedules for public events like street fairs, carnivals, concerts, etc. These events create much better opportunities for the weekend warrior in the smaller cities here in Central Pennsylvania.