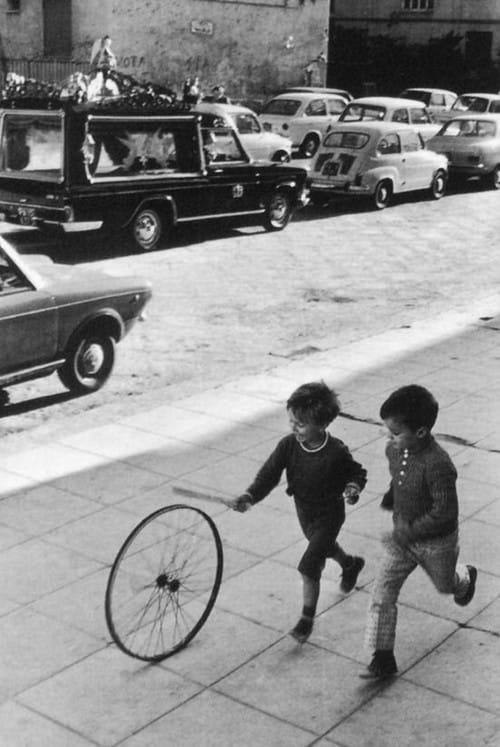 I’m sure Henri Cartier Bresson would be in just about everybody’s list when it comes to masters of street photography so there is nothing I can say or write that hasn’t already been said.

He was born into a wealthy family and this gave him opportunities that weren’t available to most during his younger days. He was able to travel the world and was one of the first (if not the first) to use a Leica 35mm Rangefinder camera. The Leica, being small and compact, enabled him to work inconspicuously which was his preferred method. This enabled him to “fix eternity in an instant”. The ability to travel and obtaining the Leica helped Cartier Bresson change the shape of photo journalism and street photography as we know it today.

Prior to, during and after his time as a photographer Cartier Bresson was also a painter. He studied art at a private art school and the Lhote Academy. This, along with a natural eye for seeing things others would miss, was undoubtedly where his attention to detail and composition came from. If you want to learn about composition in street photography then, in my opinion, there is no better place to start than the work of Henri Cartier Bresson, which is what I am trying to do.

Cartier Bresson’s first published work as a photo journalist came in 1937 when he covered the coronation of King George VI. He took no photos of the king and concentrated purely on the crowd.

He served in the French army during World War II in the photo and video unit, was captured and held prisoner of war for almost three years. He eventually escaped at the third attempt.

After the war, in 1947, along with Robert Capa and others he became a founder member of the “Magnum Photo Agency” which is probably the best known and most exclusive photo agency in the world.

When people think of Henri Cartier Bresson the words “Decisive Moment” automatically come to mind. This was the English title of his book published in 1952. The title was invented by the publishers and not Cartier Bresson himself. Cartier Bresson said of photography,

“To me, photography is the simultaneous recognition, in a fraction of a second, of the significance of an event as well as of a precise organization of forms which give that event its proper expression”.

I think this phrase sums up street photography in one sentence. It is what we all strive to achieve. Henri Cartier Bresson died in 2004 but his legacy remains with us and will do forever.

We can all learn a great deal from the masters of street photography from the past. The likes of Henri Cartier Bresson, Garry Winogrand and Vivian Maier  to name just a few. However there are a couple of points that I think we should take into account.

Under The Influence of Ranghubir Singh